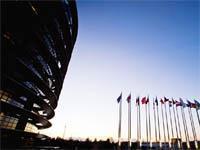 However, Russia could expect nothing else from Strasburg, which has been  trying to put pressure on Moscow over its stance on Syria. Practically all world leaders - from Merkel and Cameron to Obama - congratulated Vladimir Putin on his victory.

The European officials particularly believe that the Russian voters had been given a "limited choice," because the Central Electoral Commission refused to register the candidate of Yabloko party, Grigory Yavlinsky. The Commission denied registration to Yavlinsky after it had rejected, about 25% of signature sheets in his support (that were actually photocopies).

European MPs called on the Russian authorities to "thoroughly and openly" investigate the violations, which observers, including OSCE/ODIHR representatives, pointed out. However, the MPs called upon themselves to look into the future, rather than the past. The European deputies also stated that the European Union was determined to continue the development of the strategic partnership with Russia.

The European resolution pleased the co-chairman of People's Freedom Party (known for the Russian initials as PARNAS), Mikhail Kasyanov. Upon his return from Strasbourg, the politician told Interfax that he was "satisfied with the fact that European politicians open their eyes wider to the deteriorating situation with human rights and political freedoms in Russia. This political assessment coincides with both my position and that of PARNAS," the opposition politician stated. It appears that Mr. Kasyanov has decided to ignore the other side of the story.

The Executive Director of the Russian Foundation for Free Elections, Igor Bogdanov, expressed his opinion about the European resolution in an interview with Pravda.Ru. According to him, "the Russians elected their new president in a unique, well-organized and well-conducted election." "It was unique because so many web-cameras have never been used at poll stations anywhere in the world before," he added.

According to the expert, the presidential election campaign had certain violations and drawbacks. "But it's a natural process that accompanies any election campaign," said Bogdanov. "Assessing any campaign in Europe or in the U.S., one can find even a larger number of drawbacks," he said. "And it is not objective to question the election, which took place in our country, especially if it is being done by the people, who have never been here, but who instead listen those who scream and shout about mass violations," says Bogdanov.

A recent poll conducted by the All-Russian Public Opinion Center showed that only a third of respondents admitted "minor fraud" which did not eventually affect the outcome of the vote (34%). Those who do not believe in the announced victory of Vladimir Putin are in the minority (14%). Moreover, according to sociologists, only 2 percent of respondents said that they had noticed violations with their own eyes. On the whole, 78 percent of voters do not doubt the legitimacy of the elected president.

The head of the Russian Public Institute of the Electoral Law, Igor Borisov, said that the European Parliament resolution "had nothing to do with reality." "Official representatives of the European Parliament (it goes about the delegation), were not observing the elections in Russia. They make their statements from the words of Russian politicians - the losers, who reside in Europe and who constantly tell some sort of horrible things about the Russian elections," Borisov told Pravda.Ru.

"We had five European MPs working at the independent group of international observers. They were present here and could personally observe all of the voting and counting procedures," Igor Borisov added. "All of them highly estimated the voting process and the counting of votes. Moreover, they recommended to use some elements of the electoral system for the elections to the European Parliament. I would like to see the transparency of the procedures, through which the European Parliament is formed," concluded the expert.

Indeed, one may assume that the elections in the EU or in the United States are perfect in contrast to the "dirty Russia." In France, for example, the candidate of the National Front far-right party, Marine Le Pen, did not have the right to participate in the presidential campaign just before March 15. And all of her appeals to the Constitutional Court were wasted. In Estonia and Latvia, the so-called non-citizens have no voting rights at all.

Do we need to say anything about the manipulations with voting lists or about the use of administrative resources in the United States? Democrats still accuse Florida governor Jeb Bush of giving decisive help to his brother during the presidential campaign in 2000.

There are no perfect democracy role models. However, the European Parliament does not want to understand that.