NATO army base to appear in Vladimir Lenin's birthplace

Russia's Foreign Ministry prepares suggestions to elaborate the normative base for the transit of NATO cargoes from Afghanistan via the airport in the city of Ulyanovsk. The news was announced by first deputy chairman of the Defense Committee of the State Duma, Viktor Zavarzin. 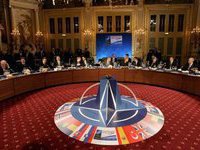 "We continue working in this direction, although there has been no decision made so far," the official said. Zavarzin added that there were no NATO and US army bases in Ulyanovsk, nor there could be any.

"It goes about the opportunity to build temporal warehouses. This could be done only under strict control of Russian customs and special services. Moreover, if the decision is positive, we would like to attract Russian carriers for this," Gazeta.Ru quoted the official as saying.

For the time being, the cooperation to provide for the transit via the Russian territory for the needs of the contingents of international peacemaking forces is being conducted within the framework of intergovernmental agreements with Germany, France, Italy, the USA, Spain and Sweden. The agreements touch upon the air transit of military personnel and property, Itar-Tass reports.

The idea of NATO's presence in Ulyanovsk is popular among local officials, particularly the governor. "We have been working on this project for a long time already," regional governor Sergei Morozov said. "Cooperation with NATO is a wonderful opportunity to develop our airport. It would confirm the international status of the airport," the governor said.

Is Mr. Morozov concerned about the increase of traffic of Afghan heroine in not-to-be-inspected cargoes? "This is out of the question. The Americans watch drug channels closely," the official stated.

It is worthy of note that the negotiations about the use of the Russian airport in Ulyanovsk were launched after Uzbekistan, whose territory was actively used for delivering NATO cargoes to Afghanistan, refused to accept the return transit. Uzbekistan decided so over the fears of illegal arms and drugs shipments to its territory.

Leonid Ivashov, the President of the Academy of Geopolitical Sciences:

"If Russia decides to do that, we should ask a good payment and political concessions on the part of the USA. Russia would need to link that to the issues that remain of strategic importance for the country. However, it just so happens that US airplanes will be able to fly in Russia's air space freely. Trains loaded with NATO cargoes travel across the country too. The US-led policy towards Russia has never been friendly - we must remember that."

The more NATO bases appear in Russia, the more jobs and humanitarian aid Russian people would get. There would eventually be no need in the Russian army. What would be the point of having it if NATO servicemen would be able to do the job? This is a very nice perspective, isn't it?

Ulyanovsk is a city and the administrative center of the Ulyanovsk region, Russia, located on the Volga River 893 kilometers (555 mi) east from Moscow. Population: 613,793 (2010 Census preliminary results).  The city is the birthplace of Vladimir Lenin (originally named Ulyanov), for whom it is named.