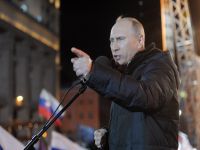 "Veni, vidi, vici," Caesar reportedly exclaimed in 47 BC, when he won the short war against Pharnaces II. of Pontus in the city of Zela, which is Zile in Turkey today.

Vladimir Putin won the presidential elections in Russia with an overwhelming majority of 64.65 percent and might exclaim, like Caesar, "I came, I saw, I won." Yet he is not the type of man to utter such words on his personal Victory Day.

In the face of the oppositions' numerous shenanigans, Putin saved Russia from another one of those infamous colored revolutions like the Rose Revolution in Georgia (2003), the Orange Revolution in Ukraine (2004) and the Tulip Revolution in Kyrgyzstan (2005).

No Crocus Revolution for Russia.

In milder climates crocuses usually bloom at the beginning of March. They blossom in lovely shades of white, purple and yellow to greet the coming of spring.

Not so in Moscow, where Putin went to vote on Sunday morning at voting station number 2079 in the Russian Academy of Sciences in Kosygina Street. Photos show him with a composed face, saying to journalists that he hoped for a high turnout rate and that he was sure Russian voters would act responsibly.

"I had a good sleep, did a quick workout and then I came here. Presidential elections are an important event. Economic policy, issues related to education, healthcare and demography depend on the head of state. The domestic political situation and the way we present our interests in the world arena also depend on the president. And finally, the president is the supreme commander-in-chief," Putin emphasized.

In parting, he noted that Election Day coincided with the end of the first week of Lent and the religious holiday of the Triumph in Russian Orthodoxy. Putin congratulated all Russian believers on these occasions. Some 200.000 web cameras had been installed at polling stations all over the country to make Russia's elections fair and transparent.

Furthermore, 700 international observers oversaw the voting process, and more than one million registered web users monitored the elections online. No major disturbances or irregularities were reported. The elections ran smoothly, as planned.

Those western opponents of Vladimir Putin, who had hoped for a sort of Crocus Revolution, will be bitterly disappointed. If they open a bottle of good champagne to drink a toast to the new Russian president, the bitter taste might be swept away.

Obviously, the Russian atmosphere is too chilly for crocuses to bloom, just as the Russian majority is staunchly resisting western-instigated anti-Putin propaganda.  A less experienced politician or a more hot-blooded man might have jumped for joy when hearing the excellent results, but not Putin. Meanwhile, he is back to business.

Reading his Government website, we might easily get the impression that he is a workaholic. He would probably change Caesar's famous words into something like "I saw, I came, I worked."

Throughout his years of service, Putin consistently visited all of the Russian regions, once every two weeks on average, to engage in direct dialogue with their leaders, trade unions, employees, soldiers, scientists, students, housewives and people in the streets.

Putin's agenda is packed full. Even during the last two weeks before the presidential elections, he managed to travel to different locations in the vast territory of the Russian Federation, attending conferences, holding speeches, answering questions and giving advice.

22nd of February: Putin meets with soldiers of the Tamanskaya Brigade and has lunch with them.

23rd of February: Defender of the Fatherland Day, Putin attends the wreath laying ceremony at the Tomb of the Unknown Soldier in Moscow.

The weekend is off. No entries to be found in the website's timeline, but it could well be that Vladimir Putin is sitting at his desk back home, writing the last of his articles which were published in different Russian media concerning the main topics of is electoral agenda.

27th of February: Putin chairs a meeting on military-technical cooperation.

28th of February: Ufa, Federal Republic of Bashkortostan, Putin meets with the Head of the Republic and participates in the national agrarian forum.

On the way, he stops in Astrakhan, Astrakhan Oblast, to talk to the residents of the building which collapsed after a gas explosion. Putin looked at the site of the disaster and accompanied the victims to their prospective new homes, two new apartment buildings that were allocated to them immediately.

2nd of March: Putin meets with chief editors of foreign media in Moscow. In this meeting, he told the foreign editors-in-chief about his stand on international issues.

"We are pursuing a peaceful policy without loud words," Putin said, quietly implicating that western leaders should stop bombarding the Russian Government with aggressive, insulting tirades and mind their own business.

The foreign press editors were interested in finding out why Putin had chosen Dmitri Medvedev as Prime Minister for his new presidential term. Putin answered that they were both "representatives of a single political force, pooling their efforts to lead Russia as a team."

He furthermore pointed out that his poll ratings had been higher because in his two previous presidential terms, he had succeeded to "put together a country that was falling apart."

The number of people living in poverty declined by 50 percent. Earnings went up by 140 percent during the eight years that Vladimir Putin was President. So he had "something to prove to the country and its citizens."

"We are not magicians," Putin joked. Yet he seems to have the magic touch. Everything he has touched so far has worked out very well.  Russia may look forward to some golden years under the next Presidency of Vladimir Putin.