Sitting Prime Minister Vladimir Putin won the presidential election in Russia. He received the votes from 63.82 percent of electors, who took part in the voting on March 4th. Gennady Zyuganov, the head of the Communist Party of the Russian Federation, comes second with 17.18 percent. Ninety-nine percent of ballot papers have been processed so far. 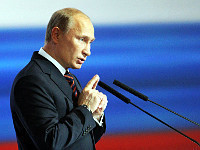 Over 100,000 people took to the streets on Sunday night on Moscow's Manezhnaya Square to support Putin. President Medvedev and Prime Minister Putin appeared on stage to speak to the participants of the meeting and thank everyone for their support in the election.

"This victory is needed to have our country modern, strong and independent," Medvedev said.

"Hi everyone! It's a great day that we are having today. Thank you for being here, thank you for supporting our candidate Vladimir Putin. Our candidate has a strong lead in the race, and I don't doubt our victory. We all need this victory, and we are not giving this victory away to anyone," Medvedev told the crowd.

Presidential candidate Vladimir Putin spoke to the people next.

"Dear friends. In the first place, I would like to thank all Russian citizens, who took part in the election today. My special thanks goes to those of you, who gathered here in Moscow tonight, who supported us in every corner of our large Motherland. I thank all of you, who said "yes" to the Great Russia. I asked you once: "Are we going to win?" And we won. We won in the open and honest struggle. But it was not only the election of the Russian president, it was a very important test for all of us, for all of our people. This was a test for political maturity and independence. We have proved it to everyone that no one can dictate anything to us indeed. We have proved that our people can easily distinguish between the desire for renovation and political provocations that only have one goal - to dismember Russia and usurp power. The people of Russia have shown today that such variants will not pass," Putin said.

"Today, we won owing to the support from the majority of our voters. We had a clean victory. We will work hard and we will succeed. We urge everyone to unite for the sake of the interests of our people and our Motherland. I promised you that we'd win. We won! Long live Russia!" Putin said.

Opposition and near-opposition organizations had to recognize Putin's victory in the election. For example, Association Golos (Voice), which is known for its criticism of the election process in Russia, concluded as a result of its own counting of votes that Putin gained not less than 53.12 percent.