The beginning of history 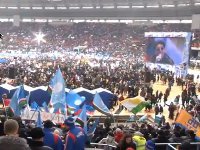 After the collapse of the Soviet Union, the American political scientist Francis Fukuyama published his famous thesis about the end of history. According to Fukuyama, western liberal democracy was the final destiny of the human kind, which all countries should follow.

Unfortunately today we know that Fukuyama's prophecy turned into a nightmare. The collapse of Soviet Union and Yugoslavia resulted in economic crisis, organized crime, terrorism and civil war. Luckily the Boris Yeltsin regime did not result in collapse of Russia, but in Vladimir Putin's rise to power in 2000. This forced the enemies of Russia to change their tactics.

The Rose revolution in Georgia in 2003, the Orange revolution in Ukraine in 2004, the Tulip revolution in Kyrgyzstan in 2005, and a similar attempted coup in Belarus in 2010, showed that democratic elections in former Soviet Union area countries had become a specific target for hostile intelligence and information operations targeted against Russia.

In 2005 Vladimir Putin described the collapse of the Soviet Union as the greatest geopolitical catastrophe of the 20th century. The Russian society became mobilized against hostile takeover and manipulation by foreign information warfare and intelligence operations.

Recently, the Arab Spring revolts, especially aggression against Libya and unheard-of aggressive information warfare against Syria, made many experts finally assured of the true nature of so-called color revolutions: they were American-led aggressive intelligence and information warfare operations to overthrow governments and leaders that are not obedient to United States. As a result, the concept of democracy itself was abused, discredited and inflated in the whole world.

After Libya, many Russians thought the next stage would be Russia, the Balkanization of the country in Yugoslavian way. Meanwhile, most Western Russia experts had been trained into anti-Russian propagandists and provocateurs, members of a new profession, in which difference between a journalist, scholar or intelligence officer was non-existent. Many NGOs in Russia and abroad had been taken over by liberals, well-trained into anti-Russian intelligence operations.

The Russian 2011 parliamentary elections faced unprecedented arrogant manipulation and falsification of election observation results, even before the elections, by well-trained American agents financed openly by U.S. foundations and obtaining instructions from U.S. embassies. They did not even try to hide the fact that their main goal was to overthrow Putin. The Russian media revealed well-financed and well-organized attempts to falsify election observation in Russia to change the global public opinion against Russia and Putin, creating suspiciousness and discontent with artificial allegations of election fraud.

But the anti-Russian hate speech turned up to be absurd. The more the American agents organized their rallies in Moscow streets, the more the real popularity of Putin grew, and the more the international public was surprised of the arrogance of the American foreign policy. A kind of a climax was the disgraceful performance of U.S. ambassador Susan Rice in the UN Security Council after Russia had vetoed the U.S. attempt to invade Syria.

The ground-breaking public talk given by Vladimir Putin to Russian masses and to the world in a Moscow stadium, on Fatherland's Defenders' Day of February 23th 2012, can be defined as the final end for the attempts to conquer the planet with American-financed color revolutions. Putin said that Russia is in a war, but that the Russian people will win the war, because winning is in the genes of the Russian winner-people. We are defenders of fatherland, he said, and added, that we won't allow anybody to interfere into our internal affairs and impose their will on us because we have our own will. Putin also asked the people of Russia, consisting of various peoples and nationalities, to be united and unite around Russia. His final words were: The war against Russia is going on, but the victory will be ours.

What was striking was that Putin admitted that Russia was in a war. Obviously, the liberal democracy attempt to dismantle Russia as Soviet Union and Yugoslavia and several Arab states were dismantled, is clearly a war against a nation. However the attempts to organize anti-Putin rallies in Russia and to blame Putin in the international press have now practically only resulted in the strong growth in his popularity. In February 2012, the relatively small and indefinite anti-Putin pickets were faced with up to 200,000 people demonstrating their will to vote for Putin, despite the freezing up to -22 F Moscow winter.

Already in autumn 2011, Putin and his fellow leaders signed a roadmap for establishing Eurasian Union and its Commission, a new superpower consisting of several countries from the former Soviet Union and their neighbors. Eurasian Union will be first based on economic integration but obviously it will be a political and military union. Putin has declared the creation process of Eurasian Union to be completed in 2012 and the Union will be in function in 2015.

Some experts have already said that re-election of Putin and his strong mandate from the Russian people, including his forthcoming victory in the war against Russia, as he said, will probably lead not only in dismantle of NATO, but also in unprecedented humiliation for the United States, not to mention breakdown of European Union. Who is Mr. Putin? is obviously an outdated question. The re-election of Vladimir Putin and the creation of Eurasian Union are the beginning of history, and the final end to export American liberal democracy values by arrogant manipulation, color revolution or humanitarian intervention.

Recently the Russian first television channel showed a report from the early February Moscow demonstration for Putin. An ordinary middle-aged Russian, who presented himself as a simple chauffeur, said he brought his family to support Putin. The Titov family will vote for Putin, the man said to the cameras, with his wife and children, in a -22 F freeze. It is the Russian middlebrow Titov and his millions of countrymen who will decide the destiny of the planet. They are the beginning of history.

Adjunct Professor in Sociology of Law, University of Helsinki