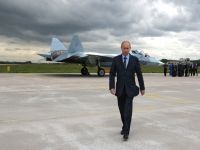 In a recent article, published in Rossiskaya Gazeta, Prime Minister Vladimir Putin shared with readers his ideas and plans for the coming decade regarding the modernization of the Russian Armed Forces.

"We should not tempt anyone by allowing ourselves to be weak. There is always the temptation to resolve one's problems at another's expense, through pressure and force," he wrote.

Putin made it quite clear that Russia will never be that "other" nation pressured and forced, as far as he is concerned. With Putin as President, no outside forces will solve their problems on the back of the Russian Federation.

Putin and his administration are prepared to guarantee Russian deterrent capability and military-technological independence.

Russia must be strong and able to defend itself, especially in these times when "ever new regional wars break out in the world," some of them in the direct vicinity of Russian borders, and when international law is eroding in terms of security.

According to Putin, it is necessary to "look past the horizon, estimating threats 30 to 40 years in advance."

Therefore Russia needs to develop modern standards for long-term forecasting, as well as a new system for military analysis and strategic planning.

The Russian Federation should be prepared for quick and effective responses to new challenges.

The military system inherited from the former Soviet Union has become inefficient. It does not meet contemporary requirements anymore. Russia needs a modern, mobile army in permanent combat readiness. Of course, the planned reforms cannot be achieved all at once, but will be implemented in several stages until 2020.

In his article the Prime Minister listed the achievements to date.

The Russian Armed Forces consist of more than 100 combined and special brigades, they are full-scale military units with modern equipment and personnel. Their alert time is one hour. They can be deployed to a potential theatre of war within 24 hours.

The Army opted for these brigades because they are smaller than the former divisions. They are more flexible, have bigger strike capability, better firepower and support.

Soldiers receive intensive combat training. Military education has been modernized for officers in order to improve their professional qualifications. Military research and science has been intensified so that General Staff can work effectively.

Four military districts have been formed: West, South, Central, East. They are operational as well as strategic commands.
The Russian Air Force has seven large airbases with good infrastructure. The network of airfields has been modernized, and 28 airfields have been upgraded. A further 12 are in the planning for upgrade.

The early missile watching system has been improved, with tracking stations in the Leningrad and Kaliningrad area. One more is being tested near Irkutsk in Siberia.

Russia's strategic aviation has also been modernized. It has 10 missile regiments with Topol-M and Yars strategic missile systems. Strategic Tu-160 and Tu-95MS bombers will be maintained and equipped with a new long-range cruise missile system. A new aircraft is currently being designed for strategic long-range aviation.

Nuclear deterrence will keep its leading role in the Russian Armed Forces. Russia is currently developing its retaliation potential against US and NATO missile defense policies.

Already outfitted and using advanced equipment are 250 military units, including 30 air squadrons. The goal is to augment the use of new armament by 70 percent until 2020.

Putin also shared his thoughts about the social dimension of these measures with his readers.
In his opinion, qualified military personnel with a high level of education and knowledge are necessary to operate effectively. All servicemen must receive good pay and full social benefits, including health care, rehabilitation treatment, health insurance, and a decent pension. Their salaries should be at the same level as those of other qualified professionals.

Military pay has been tripled since January 1, 2012, and the pensions of all servicemen have been augmented by 60 percent. They will be raised at least two percent every two years. Retired servicemen also receive special education and housing certificates.

Military Police and Stand-by Forces will be introduced. The Cossacks shall be helped and involved in the Armed Forces again. The overall aim is to create a professional and highly motivated army. In all Russian schools, military patriotic education and military-based sports are being organized.

The Popular Front is going to establish a voluntary movement in support of the Russian Armed Forces and defense industry.

They decided that most of the funds will be spent on the national defense industry in order to stimulate the Russian economy and secure jobs. Foreign imports will remain an exception. They are only needed when access to advanced technologies is necessary.

Dmitry Rogozin reported that currently 1,353 Russian organizations in 64 Russian regions are involved in the Russian defense industry, with 2 million people employed. There is a flow of young specialists into the defense sector, a promising trend for the future.

The Defense Ministry is studying the planning of NATO Armed Forces, at the same time analyzing the past Soviet experience.

The Russian Defense Minister pointed out that "looking beyond the horizon" in air and space defense, in radio-electronic warfare and in strategic nuclear forces will be helpful, but "blindly copying" foreign weapons and military hardware will not be useful.

Russia is ready to follow its own path for national security and defense.