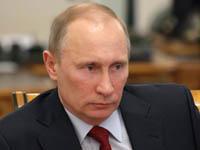 During his two first terms as president and his tenure as Prime Minister, Putin accomplished a remarkable transformation of Russia from a virtually bankrupt country suffering under a criminal anarchy into a prosperous emerging democracy with all the attributes of a normal country. But 12 years at the helm of such a vast country with all its accumulated problems has been far too short a time to cure all its ills. And some things can be cured by time alone, during a process of peaceful and stable development of social practices in all fields of life. Therefore it is so important that Putin will be re-elected to oversee the continuous peaceful social development.

Notwithstanding these remarkable achievements, I predict that we have only seen the beginning. Putin has built the platform which will now enable him to turn the newly stable Russia into a modern progressive country. Therefore we may speak in terms of Putin versions 1.0 and 2.0, the former being a Putin of the transition period, and the latter Putin the modern reformer.

The early reformers and their advisors did not understand what would be the nature of the transition period. People and their social practices were not in the picture. It was generally thought that the transition could be undertaken solely through a number of decisions and concentrated actions without regard to time and the conflicting needs and interests of real people. Nothing expresses the spirit of the post-Soviet market reforms better than the ill-omened war cry of "shock therapy." Devised by people who must be thought of as the mad scientists of horror movies, they actually inflicted the shock on entire populations. Democracy too would happen, they fancied, just by letting everything loose. But what followed was chaos and anarchy.

We must precisely see the first 12 years of Putin's rule as a transition period, not only a transition from the Soviet system but also a transition from the criminal anarchy of the 1990's. This should explain all Putin's actions in the sphere of democratic institutions, media, social life, business, and macroeconomic stability. They were aimed to bring order, bring elementary social protection, and bring security against domestic and foreign threats. In short Putin 1.0 was about a normalization of the country. This normalization now provides a platform for pursuing intelligent, fine-tuned but sweeping reforms in all areas of life.

In the series of pre-election articles where Putin has outlined his vision for Russia he sets some bold goals for the future of the country. But his critics say "Where has he been during the last 12 years?" The question is: Where have they been? How come they cannot grasp what a different country Russia is today in every positive sense!

They don't understand that the system of corruption that stemmed from the Soviet economy of scarcity, and became the norm in the 1990's, could not be tackled without a sufficient level of state power, which was nonexistent when Putin came to power. It is only in the very recent years that Putin has been able to put in place a functioning state apparatus that can take on the problem. And therefore, no doubt, in a few years we will see great progress in this respect.

"The last 12 years show that Putin has failed in reviving industrial production," the critics claim. But they do not understand that it is only a few years ago that Russia reached a situation where questions of far-reaching policies on industry could be raised in the first place (other thing that in reality all is not so dire in this respect when we look at the facts). Prior to that, the quality and reach of government was too weak for that; there were no economic conditions for that either; and the priorities had to be elsewhere. Not to forget that the policymakers and their advisors (and critics) had to go through a learning curve as well. Russia has been only some 2 or 3 years in a position to seriously deal with these issues. It is therefore now that Putin is seizing the opportunity, at the moment when it is first given, to launch a comprehensive reindustrialization and modernization program.

During his presidency Medvedev quite correctly set as his priority the modernization of the economy. It seems to me, however, that the program laid too much emphasis on calling forth a high-tech revolution, instead of stressing the need of a general modernization of all aspects of business. I mean that more fundamentally the government should make a concentrated effort to modernize the laws and administrative practices that hinder businesses to thrive in a competitive global economy. This means an accent on a total de-bureaucratization of the country. Sure a lot has happened in this respect, but it seems to me that the problem has not even been fundamentally recognized, although Putin's election program now for the first time speaks about the problem in the right terms. Of Russia's three ills inflation is now finally under control, the nature of corruption has been understood and there is a plan and force to tackle it, but the fight against bureaucracy is still haphazard.

Even more important for the economy than the plans to reindustrialize and modernize the country are Putin's social programs of raising the pensions and salaries of state employees. Since Putin ascended to the presidency in 2000 the average pensions have risen some 15 times from an equivalent of $18 to $300, having thus reached an acceptable level considering the present purchasing price parity. In the same time the salaries of judges have been raised some 10 times, creating the most fundamental condition for the emergence of an independent judiciary. Next in line were the salaries of police coinciding with a total reform of the entire authority including its rebranding from militsiya to police. From January this year these salaries have gone up with 200%. The salaries of military have been hiked from start of the year with some 250 to 300% so that, for example, a lieutenant's salary now range from  a starting salary of 50,000 rubles ($1,700) to  80,000 rubles ($2,600) compared to the meager 17,000 rubles ($600) of last year. When comparing these salaries with those of other countries, one also has to keep in mind that the income tax in Russia is only 13%, flat for all income levels, meaning that the take-home pay is comparably even higher. And now in his election program Putin has promised to raise by a quantum leap the salaries of doctors and healthcare professionals, school teachers and college professors, as well as increase child support, and raise the student stipends with a whopping 500%.

And then some people still want us to wonder why the Russian people vote for Putin! According to the opposition, which represents the only sources that the western press quotes on these matters, nobody would support Putin. But, on the contrary, why on earth would people support the opposition that actively opposes these social policies?

Is this populism? Yes, says the opposition, so says the western press. But why is it not populism to pay decent salaries in Europe? The more when Russia can afford it and Europe cannot. Just ask the Greeks, Spaniards, Italians, Portuguese, Irish, whose salaries have been cut for the sake of austerity. Or the men and women who are condemned to more years of hard labor as the retirement ages are raised all over in Europe.

Putin is putting the salary hikes through, because this is the moment when it can be done.  Because justice cannot be postponed.

But this is not only a question of justice and equity. This generous social spending represents from the other hand a massive economic stimulus package - a stimulus that must be seen as the most clever ever devised. Beats hands down any Keynesian juggle to throw good money after bad in a frantic activity to build roads, bridges, school building, libraries and fire stations. In the Putinian stimulus there are many pluses, in one sweep you reach social justice and economic stimulus; spread wealth evenly over the country, and ensure that the stimulus goes towards causes that will immediately help the local economy. Not to mention the advantages of this kind of stimulus over the EU and USA policies of propping up the banks with tax payers' money (or by printing more of it).

Again the critics from the unconstructive opposition claim that this social spending is unbearable and will cause a budget deficit. Well, debtless as Russia is, it can afford a budget deficit if it were to come. But as these critics don't get the stimulus side of this, they can't grasp that this money will fuel the economy so that its effect will multiply as it moves through the economy resulting in a higher GDP and higher tax revenues. Such celebrated don't-do-anything economists as Kudrin have difficulties to grasp this logic.

Now Putin's Russia (as they say) is a normal country, with the foundations of a democratic market economy and welfare country. The transition is over. And modern Russia starts today, with the reelection of Vladimir Putin.