USA wants Comrade Zyuganov to be Russia's next president

The U.S. is interested in Gennady Zyuganov's victory in the presidential elections in Russia, said Anthony Salvia, former U.S. Deputy Assistant Secretary of State in the Reagan administration. It is not ruled out that American political consultants are involved in the campaign of the Communist Party leader. 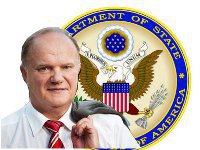 Judging by the attitude of the protesters "for fair elections," the Russian analogue of "Arab spring" is not to be expected at the presidential election in March of this year. The leaders of the regional opposition groups returning from Moscow say that the rallies against the fraudulent elections will be conducted as scheduled at least until early summer. Moscow opposition is currently discussing not the plans for the upcoming revolution but the tactics of conduct at the election: whether to ruin their ballots, or vote for an agreed candidate. This protest candidate will be the Communist Party leader Gennady Zyuganov. This decision is likely to be taken at the very top and will soon be brought to the Russian "dissidents."

Former Deputy Assistant U.S. Secretary of State in the Reagan administration Anthony Salvia talked about the attitude of Washington towards the expected results of the upcoming presidential elections in Russia and the behavioral strategies of the U.S. administration on the pages of The Jerusalem Post. Answering the question "Who is preferable for Washington - Putin or Zyuganov?" the author clearly opts for the leader of the Communist Party.

According to him, for the United States it is important that the elections in Russia are won by anyone but Putin, even if it means the restoration of the communist regime under Zyuganov. Washington is going to de-legitimize the current Russian government, wrote the author. First, he believes that the fact that Putin defends Russia's national interests is an unacceptable arrogance in the eyes of Washington professing "revolutionary, utopian world view." Second, in geostrategic terms Russia should be either dismembered or a pro-American regime should be installed in the country. He wrote that it would be impossible to completely encircling China (which is a clear geo-strategic goal of the U.S., given a recent announcement of the deployment of the U.S. forces in Australia), if first they do not achieve a complete submission of Russia.

In this sense, the only one who can compete with Putin in the election is Zyuganov, the leader of the second in terms of power political party in Russia that secured nearly 20 percent of the vote in the last parliamentary elections. In this case, the author is aware of the fact that Zyuganov, of course, is a transitional figure, and Washington will use Zyuganov's victory in the elections to achieve their long-term goals of encirclement of Russia with the aim of eliminating it as an independent player on the world stage. The coming of the communist leader to power will be presented as a revival of the "red menace "'and public support of the U.S. and European allies will be secured.

According to political analyst Sergei Markov, this is not the first time when the Americans have publicly expressed their support for Zyuganov. The expert said that in March of last year, known for his anti-Russian statements U.S. Vice President Joe Biden met with representatives of the Communist Party. He said that he would have never thought back in the 1970s that someday he would support the Communists and wish their victory. Markov said that it was not so much about Zyuganov, as it was about Putin. "American elites want to defeat Putin, and they do not care who would cause this defeat. They do not like the fact that Putin acts as the consolidation of the center of anti-American forces, so they are willing to use anyone to strike at Putin. And while they are quite negative towards Zyuganov, the hope to cope with him later," Markov told Pravda.Ru.

Alexander Dugin, the International Eurasian Movement leader, shared his opinion on the situation: "There is consensus in the Western elites that Putin's focus on the strengthening of Russia's sovereignty is unacceptable in politics on a global scale, since it limits the construction of the West-centric global world governed from the center of Western civilization. This is why the Americans consider any alternative to Putin, and will support in one way or another, directly or indirectly, actively or inertly all that is opposed to Putin, both within and outside of Russia", Alexander Dugin said.

"The Global system signed a death warrant for Putin. The American analysts have reached a serious discussion about support for Zyuganov, whose ideology is more anti-Western than Putin's, which means that the Americans are not looking at the words but the deeds. Putin has slowed down the collapse of Russia and returned patriotic agenda. He is holding back the pro-American agents of influence and does not make concessions, does not give up, therefore, his dismantling is a major challenge for the United States and the entire Western world. All means are good for this, even Zyuganov," continues Dugin. He noted that Zyuganov, of course, is "a failed and obedient politician," and therefore is not a real alternative to Putin. "But the West and its systemic orientation are ready to focus on dismantling of Putin under any scenario," he said.

We can only speculate on the seriousness and volume of support to the leader of the Communist Party from overseas. Sergei Markov said that it is hardly worth talking about American political consultants sitting in the headquarters of Zyuganov. The Communist Party is for the most part opposed to the U.S., and therefore is unlikely to forsake its principles and remain silent about this turn of events. On the other hand, the observation of the electoral campaign of the Communist Party in 2011 showed that the Communists looked closely at the new political technology, using such resources as the blogosphere and social networks. For example, a video clip of the network user leninkpf "Putin vs. Medvedev. Election of 2012" became extremely popular. At the same time, the communists have stressed that the party has nothing to do with the clip, saying that it was a creation of the masses.