New US Ambassador to Russia starts with lies

The diplomatic career of the former Special Assistant to the President of the United States National Security Affairs Michael McFaul did not have a particularly successful start. First, he provoked a tremendous domestic political scandal by inviting representatives of opposition parties and movements to a closed meeting. Now, he accused a TV channel of lying.

The reason for the new scandal was his post on Twitter. "@M_Simonyan when we met at White House you asked me tell you when RT ran something untrue. On RT today, @McFaul sent @Navalny to Yale. Lie. " McFaul was referring to the editor-in-chief of Russian Today TV Channel Margarita Simonyan. The opposition Russian media did not take long to shoot out headlines like "The U.S. Ambassador caught the pro-Kremlin television channel RT lying." The commenters also took advantage of the opportunity to kick power in the comments to this news. 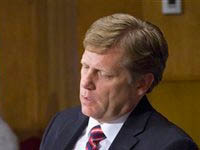 A few hours later Margarita Simonyan twitted back. "The Ambassador McFaul made us work overtime today! I made my guys sit down and watch all our programs on five channels. Nothing like this has been found. I think now the State Department owes our guys a bonus for working overnight."   The RT editor also explained that the only material in which McFaul was referred to Navalny was a comment (!) of a political scientist Igor Panarin about the meetings on February 4, released not even on a TV channel, but published on the site of RT and accompanied by the obligatory in that case footnote: "The statements, views and opinions expressed in this article are those of the author and do not necessarily represent those of RT".

Generally speaking, the story is worthless. Otherwise, we need to prohibit the media as a source of dissemination of information, since there will be at least one objection to each statement. In the end, no one canceled such thing as the right to respond. McFaul, who spoke on the subject in "Kommersant," would repeat the same thing on the RT. M. Simonyan had and ironic comment on this occasion: "Today when an embassy employee will come for a visit, I'll be sure to give him my number for McFaul. Messaging on Twitter is somewhat awkward."

Appointment of Michael McFaul as U.S. Ambassador to Russia was the first grand PR-action of the U.S. administration. In fact, if we talk about professional activities, McFaul has not done anything that has not been done by his predecessor John Byerly. As McFaul, Byerly studied in the Soviet Union, was a specialist on Russia and Eastern Europe and had regular meetings in the rank of ambassador with representatives of Russian non-systemic opposition. Like his successor, he had a blog in Russian in "Live Journal". The only thing he lacked was high-quality PR that would make Byerly more than a high-level, but at the same time the average civil servant.

Michael McFaul is not a diplomat. In Barack Obama's administration, he served as Special Assistant to the President for National Security Affairs, Director for Russia and the Eurasian region in the National Security Council, and was considered the unofficial curator of the Russian "dissidents." Of course, McFaul was not a diplomat and is not going to be. He is a politician. His current mission in Russia is political. Accordingly, he acts as a politician, trying to be noticed in the information field as often as possible. Today part of it is the blogosphere that can serve as a tool for affecting public opinion in not the most diplomatic ways.

McFaul can be called a consistent supporter of the theory of nonviolent protest. He is unlikely to be as notorious as "Arizona hawk" McCain with his maniacally persistent predictions of inevitability of the Arab scenario in Russia, which for the most part is simply laughable. McFaul has a clearly built line of conduct that does not rule out a force scenario. Yet, he is more focused on the soft policy of promoting democracy abroad, which implies the development of network democracy and non-governmental institutions of civil society.