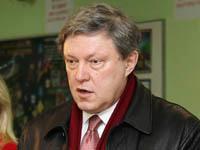 Ashton reminded that the OSCE made a number of observations as a result of the parliamentary elections, which took place in Russia in December 2011. In addition, Ashton reminded of the meeting, which is going to take place in Moscow on February 4.

As a matter of fact, there will be a number of meetings held in the Russian capital on February 4. The "anti-orange"meeting on Poklonnaya Gora is one of them, but the EU foreign chief did not mention them, of course.

The US State Department also set out its disappointment in connection with Grigory Yavlinsky's withdrawal from the list of presidential candidates. "The United States is disappointed by the refusal of the Russian Central Election Commission to register the candidacy of Grigory Yavlinsky to compete in the Russian presidential elections," State Department spokeswoman Victoria Nuland said last week. "Open political competition requires that electoral laws be applied fairly to all parties and candidates," she added.

Strangely enough, neither Washington, nor Brussels expressed any regrets about the withdrawal of Dmitry Mezentsev's candidacy (the governor of the Irkutsk region). Mezentsev was withdrawn from the registration together with Yavlinsky.

Sergei Danilenko, a member of the commission, said that "it was the first time when we had photocopies instead of signatures. Yavlinsky himself claimed that there were not more than three percent of fake signatures.

Igor Bogdanov, CEO of the Russian Fund of Free Elections, believes that the situation when the EU and the USA support Grigory Yavlinsky is absurd.

The Central Election Commission was acting in accordance with the Russian law, when the decision about Grigory Yavlinsky's registration was being made. "Such appeals (from Catherine Ashton - ed.) mean that they want us not to observe the Russian law," Bogdanov said.

The statements in support of Grigory Yavlinsky could be expected, though. Yabloko has been a member of the European Party of Liberals, Democrats and Reformers, which is the third largest faction in the European Parliament now.