What else can crash in Russia after Phobos Ground?

It appears that the investigation about the reasons of the crash of Russia's Phobos Ground spacecraft is drawing to its end. As a matter of fact, the reasons, which made the interplanetary station stay in Earth's orbit instead of flying to Mars, were clear from the very beginning. The electronic equipment on board the craft malfunctioned. The engines of the satellite did not start as a result. 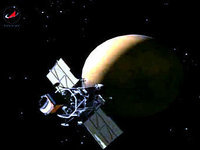 Soon after the breakdown, Russian specialists put forward a curious version: Phobos Ground went out of order because of the US radar station located on the Marshall Islands. The US uses those radars to monitor the asteroids that fly in dangerous proximity to our planet. Russian scientists said that the signals from the US radar disrupted the work of the electronic equipment on board the satellite. American officials immediately stated that the radar could not do that just because the radar was not transmitting any signals as the Russian spacecraft was flying above the Marshall Islands.

However, NASA astrophysicists ironically said that the radar was working uninterruptedly. Therefore, it could affect all spacecraft that fly above the area where the radar station is located. Why don't they fall all the time then? Since there were no similar accidents in the past, the radar was not the reason. Moreover, Russian scientists conducted experiments, which proved that the signal of that type could not damage Phobos Ground.

According to another theory, the spacecraft became defunct because of space weather. It particularly goes about certain plasma formations in the ionosphere, which could appear there as a result of a powerful solar flare. It was said that the flow of hot plasma could cause the malfunction on board the spacecraft.

However, Sergei Gaidash, the chairman of the Center for Space Weather Forecasts, stated that the space weather was absolutely normal during the launch of the spacecraft.

Why do they search for external factors? Why does the committee try to cling to such unrealistic versions as solar storms? Is it at all possible to launch a space vehicle in case there is something abnormal happening in the ionosphere?

The answer to these questions is simple. Phobos Ground, like many other space vehicles, was insured. It will be possible to receive compensation from insurance companies only if it is proved that the accident occurred because of external factors. Since Phobos Ground cost Russia nearly 5 billion rubles, the committee would be ready to have even the aliens involved.

It does not mean, though, that the committee is not investigating internal reasons that could cause the breakdown. One of the versions says that the satellite was lost because of software error. However, it was later determined that the software of the spacecraft was all in order.

Another version said that Phobos was equipped with counterfeit chips of foreign origin. However, officials representing enterprises of the Russian space industry said that the appearance of such part in production was impossible.

The head of the Russian Federal Space Agency, Vladimir Popovkin, stated that the committee was sticking to two basic versions. The first one of them is the use of counterfeit chips. The second one is the influence of heavy particles (which particles exactly - not specified), which caused the counterfeit chips to malfunction.

As we can see, the "combined version" is winning. It will therefore be possible to get money from insurance companies and punish the guilty. The people, who have been in charge of science and education in Russia during the recent several years, do not have anything to do with the breakdown of Phobos Ground. Of course they do not.

As a matter of fact, the reason is all about administration. Astronomy as a subject was canceled at Russian schools several years ago. Scientists have to work day and night to make their ends meet. Many of them either decide to quit science or move out of Russia to work abroad. They break the process of succession in science too. One shall assume that one day Russia will not be able to launch balloons, let alone interplanetary stations.

This is exactly what happened at the enterprise that built the station. In 2007, then-general director Georgy Polishchuk decided to "rejuvenate" the personnel of the company. He fired all who were aged above 45, including those who worked on the Phobos Ground project. They hired younger specialists, who did not have proper experience, though. Igor Goroshko, the then-chief designer of the enterprise, quit working soon afterwards. He was replaced with Yury Zaiko, a talented programmer, but not a designer.

Mr. Polishchuk created anarchy at the enterprise. The communication between the departments was taken to absurdity. Engineers could no longer understand who was responsible for what. One and the same job could be entrusted to two different departments. As a result, Phobos Ground was not ready for the scheduled launch in 2009.

Unfortunately, this situation is typical for many branches of the Russian industry. The entire building of science, which Russia has been erecting meticulously for two centuries, may tumble down and fall just like Phobos Ground did.