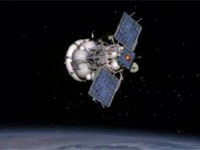 The interdepartmental committee, which investigates the reasons of the breakdown of Russia's Phobos Ground spacecraft, presented the basic version of the accident. Sources at the space industry told Interfax said that, most likely, the spacecraft did not enter the departure trajectory to Mars due to the influence of plasma formation in the magnetosphere of the Earth. Scientists doubt, though, that this theory explains what exactly happened on board Phobos Ground.

Versions of the external impact have been voiced before. Specialists particularly blamed a US radar. American officials strongly rejected the accusations and refused to take part in the investigation of the space accident.

The results of the work of the intergovernmental committee were delivered to Russia's Federal Space Agency, Roscosmos. The official announcement of the reasons of the accident is to be made on Sunday, Jan. 29.

The conclusion about the influence of the plasma formation was made as the scientists analyzed the launch date of the spacecraft - November 9 - and the powerful X-class solar flare, which took place on November 4. The solar activity was abnormal during that period. The flare was accompanied with the strong emission of the coronal mass (plasma) that weighed several billions of tons. The flare triggered a number of magnetic storms, which lasted for weeks.

The scientists found seven dangerous zones on the Sun as they were studying the phenomenon. The specialists concluded that it was the largest group of formations on the surface of the Sun since 2005. The square of the largest spot on the star was 17 times larger than the square of the Earth.

The experts thus concluded that the Russian spacecraft incidentally found itself in the cloud of plasma, and the electronic equipment of the vehicle went out of order.

Some Russian scientists said, though, that the official conclusion of the committee was not true to fact.

"This is impossible. Plasma formations of this type may appear at certain altitudes. As a rule, they are much weaker than would be required for exerting any influence on the spacecraft," Marat Deminov, a chief scientist with the Institute of Earth Magnetism, Ionosphere and Radiowaves Propagation (IZMIRAN), told RIA Novosti news agency.

According to the professor, plasma formations may appear because of rocket emissions, but they are very weak. In addition, the USA's HAARP in Alaska can warm up plasma in the ionosphere. However, the power of the ionosphere will not be enough to affect the electronic equipment inside the satellite anyway, the scientist added.

Natural plasma formations are incapable of affecting spacecraft, the scientist believes. "When they talk about the plasma formations, which are not connected with human activities, this is purely fiction. There are no facts to prove that," Deminov stated.

In addition, scientists say that the situation with the solar activity could not affect the Phobos Ground either. Sergei Gaidash, the chairman of the department of space weather forecasts with IZMIRAN, told RIA Novosti that space weather for November 9 was normal.

"All was normal. There was nothing that could affect Phobos. We sent that document to the committee," Gaidash said.