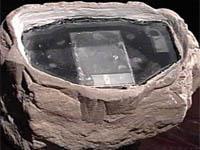 Russian TV journalist Arkady Mamontov proved to be right. He was not expecting any apologies from his colleagues. Practically none of them, who had been cracking jokes about the spy rock during the recent six years, even thought to admit that they were wrong.

Read and take part in the discussion of the spy scandal on Pravda.Ru forum

It is an open secret that offence is the best defense. However, there was no joint tactics chosen. Here is what the director of SUP Media, Anton Nosik said:

"So it turns out that the spy rock existed indeed. It's frightful to think how much budget money had been wired on the line of Ketchum PR and the like to get such a confession from the former advisor of the former prime minister and to air it on BBC's prime time. In some five years, when Rahm Emanuel and Karl Rove buy "Mikhailov and Partners" agency, they will tell us on CNN that Putin indeed raised an ancient amphora from the bottom of the Black Sea. That will be the moment when we understand everything, although it will be too late, I'm afraid."

Journalist Sergei Parkhomenko is not certain that Jonathan Powell was bribed. "Jonathan Powell, the former head of Blair's administration, said on his own behalf to the authors of the BBC documentary, that the renowned spy rock was not an invention of the Russian propaganda. Does anyone understand why everyone thought that Britain had acknowledged the fairness of the accusations?"

"It was not Britain that acknowledged that. It was Powell, Blair's former aide, who said that, wasn't it? He is a live person, he has his own opinions and views, his relations with former colleagues and rivals. He has his games and intrigues, in which he partakes now. Does anyone know anything about that at all?  Or do we believe that British officials are never wrong and that they never lie when there's a need for it? Why is there this bowing and scrapping to the West? Why do we now believe every word that they say?" Parkhomenko said.

Blogger Oleg Kozyrev, whom Mamontov criticized, said: "The story with the spy rock was not the most important thing in Mamontov's film. The most important thing that the film said was that Ludmila Alekseeva and her Moscow Helsinki Group was like James Bond or Rambo who can down helicopters with grenades mounted on the tips of arrows."

Only one person - Marat Gelman, the Director of the Center for Contemporary Arts - presented his apologies to Arkady Mamontov. Is there a need for any further comment here?