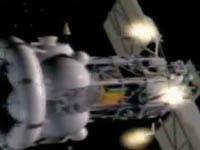 Vladimir Popovkin, the head of Russia's Federal Space Agency, named the main versions, which became the reasons for the failure of the nation's Phobos Ground Mars exploration project. US officials stated that the US government was in no way connected with the breakdown of the spacecraft. However, the chairman of Roscosmos still believes that the Russian spacecraft could come out of order because of a US radar. At the same time, Popovkin does not remove responsibility from designers, engineers and other specialists, who were working on the creation and the launch of the spacecraft.

"The committee considers this version (the radar impact) as one of the reasons. The main ones are the mistakes that could be made during the making and the tests of the probe," Popovkin said Thursday in an interview with Vesti FM.

"There is a version saying that they (the Americans) had a powerful radar working. The radiation could cause a malfunction for the equipment of the spacecraft," Popovkin said. According to the official, if this information is confirmed at least partially, Russia will ask NASA specialists to take part in the investigation of the reasons of the breakdown.

It is not the first time when Russian specialists notice strange faults in the systems of domestic spacecraft when they fly above the Western hemisphere. Russian news agencies reported that Phobos Ground could fail because of the influence of the radar on the Marshall Islands.

Vice Prime Minister Dmitry Rogozin also promised to come to all necessary conclusions in case the information is confirmed. The committee, which investigates the reasons of the breakdown, is currently working on a special experiment. Specialists intend to check whether the US radar could show a considerable influence on the Russian space station. The equipment block, similar to that installed on the Phobos Ground will be exposed to the radiation, the power of which will be comparable to the radiation of US radars.

In case the US guilt is not established, Roscosmos will look into the problems in the Russian space industry thoroughly. "I am ready to take tough measures to optimize the industry. We should have the division of labor, for all enterprises are ready to make space vehicles now," Mr. Popovkin stated.

The official set out his regret about the fact that the Russian space industry had been commercialized too much. "Some directors were dealing with commercial activities rather then their work duties. We will have to talk to them," Popovkin added.

In the meantime, the US authorities reject any suspicion about their implication in the failure of the space probe. State Department spokeswoman Victoria Nuland said Wednesday the US helped in efforts to re-establish contact with the spacecraft after it was stranded in Earth orbit. She said that although the recovery efforts were unsuccessful, the U.S. also helped monitor the final orbits of the Phobos-Ground probe and its uncontrolled entry into the Earth's atmosphere, The Associated Press reports.

NASA officials stated that the radar on the Marshall Islands was not working during the launch of the Phobos Ground on November 9, 2011. They also said that if the radar could cause a malfunction on board the space probe, such incidents would have been plentiful. Satellites fly above the Marshall Islands regularly, NASA said.

The Russian spacecraft was staying at the altitude of 200 kilometers as it was flying above the territory. The radar would not have been able to affect the electronic equipment on board the probe, Martin Slade, of NASA's Jet Propulsion Laboratory said.

Jean-Luc Margot, an astronomer with the University of California, calculated the amount of radiation that the Phobos Ground probe would have (hypothetically) experienced had it accidentally crossed through the most powerful radar beam in the world - the one emitted by the Arecibo Observatory in Puerto Rico, Space.com said.

"The amount of exposure is about 10,000 times less than the level that is considered safe for humans by the FCC," Margot said.

The investigation of the failure of Russia's first Martian mission in 15 years is in full swing, but Roscosmos already plans its next steps in exploring the red planet.

"We are conducting negotiations with the European Space Agency to fly to Mars again in 2016-2018," Popovkin told Vesti FM.

Previously, Vitaly Davydov, deputy head of Roscosmos, said that the agency "was thinking to make the Moon the next step." As for Mars, Russia was planning to explore the planet in cooperation with foreign partners. The Europeans, for example, have already offered Russia to participate in ExoMars project, which is being implemented together with NASA.

An orbital spacecraft is to be launched in 2016 within the scope of ExoMars project. The probe will be collecting the data about the sources of methane on Mars. Two Martian rovers are planned to be launched to Mars in 2018.

Before 2020, Russia plans to launch two automatic space vehicles to the Moon - Luna Glob and Luna Resurs. The further exploration of the Earth's satellite will most likely be conducted in cooperation with foreign partners.

"We do not want to send another man to the Moon. We know that there is water on the Moon in the polar areas. We are talking about that with NASA and the European Space Agency. There are two variants about it. We can either build a base on the moon or make a station around the Moon," Popovkin said.