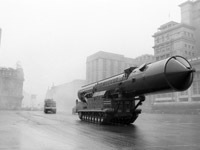 Assault grouping of Strategic Missile Forces in the future will be enhanced by fundamentally new strategic missile systems that have a greater potential to overcome any missile defense.

"We count on receiving qualitatively new missiles with warheads in 2018-2020 that will allow overcoming any missile defense system created by that time," a source in the Defense Ministry told "Interfax". He added that "now work is being conducted on a missile system with a missile of the middle class with a new type of military equipment, so that at the turn of 2015 we could start upgrading one of the missile divisions to accommodate this complex."

Previously, the Defense Ministry reported that the work has begun on yet another complex designed to launch a 100-ton intercontinental ballistic missile.

Meanwhile, the work on implementation of the measures proposed by President Dmitry Medvedev in response to the deployment of missile defense in Europe is carried out in other directions. This year another two divisions of SRF will receive the newest rocket systems "Yars" with an intercontinental ballistic missile RS-24. The systems designed to replace, in particular, obsolete "Stiletto" are already on duty at Ivanovo.

"In 2012, redevelopment of the Second Regiment of Teykovsky Division (Ivanovo region) for a mobile system "Yars" will be fully completed, and the work on upgrading of the complex in the Novosibirsk and Kozelskaya divisions (Kaluga region) will be commenced," "Interfax" was told by the official representative of Press and Information of the Defense Ministry, Colonel Vadim Koval. He added that in the division Kozelskaya "Yars" will be deployed in a silo version.

In November, Dmitry Medvedev made a formal statement regarding the U.S. plans to deploy its missile defense systems in Europe. Due to the reluctance of the U.S. side to guarantee that it will not be directed against Russia, the president announced a set of measures to be taken in response to the U.S. actions. Thus, the introduction into service of a radar warning system for missile in Kaliningrad was expected as well as enhancement of covering of the SRF' objects. Medvedev also talked about the possibility of withdrawing from the treaty START-3, and development of measures to conduct cyber-warfare and creating a new kind of troops - Air and Space Defense.

Public opinion and the opinion of experts on the President's statement then divided. While some of the media outlets called Medvedev's response "harsh", the politicians and military experts noted that the proposed measures were useless against missile defense and looked like "pre-election" promises. At the same time, the Ministry of Defense continues to say that the latest Russian weapons are capable of withstanding external threats. It was announced that within 10 years SRF forces will be fully modernized through the replacement of obsolete missiles "Stiletto" and "Topol" with the latest "Yars" and "Topol-M".

As for "Yars," the first regiment in the Teikovo was brought up to full staffing last year. In December of 2011, in the same division another regiment with these complexes was placed on duty. Later, a number of other missile compounds will be changed to accommodate the missile system "Yars".