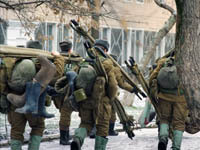 He became the first hero of Russia's first Chechen war. The decree of the Russian President on awarding the title of Senior Guard to the Ensign Viktor Ponomarev was signed on December 31, 1994, just days after the onset of hostilities. The same day the storming of Grozny occupied by Dudayev began.

The events of those days are called "first Chechen war" out of habit, although actually the official name of the conflict is "measures to maintain the constitutional order." According to official numbers, 175 people were awarded the title of Hero of Russia during that war.

305 participants of the "second Chechen" were awarded the title of heroes as well. That war is officially called a "war to repel invasion of militants in the Republic of Dagestan, Second Chechen War and continued action to eliminate terrorists in Chechnya."

Many Russians remember television coverage from the very beginning of the "first Chechen" war. Of course, by the time the Russians after the Soviet stagnation of television showing that it is "all good" were already used to the "hot" videos: shootings at the White House, the events in Vilnius, Tbilisi, and so on. Yet, the tanks in the streets of Grozny were shocking. It became clear that this is not just "measures", but a real war.

It was in those days when Viktor Ponomarev, Senior Warrant Officer, Sergeant of the infantry reconnaissance division of the 68th battalion of the North Caucasian Military District committed his heroic deed.

Heavy fighting in December of 1994 was blazing at the distant outskirts of Grozny. The units of federal troops were not able to break the resistance fighters. The federal troops suffered casualties, but were still gaining the first combat experience.

By the decision of the Northern Command troops, the most prepared reconnaissance battalion where officer Ponomarev served as a senior warrant was assigned to perform the task.

But first a few words from his biography. Viktor Ponomarev was born on February 27, 1961 in Volgograd region into a peasant family. He graduated from high school. Over 10 years he served in the Soviet, and then the Russian Army.

On the night of December 20, 1994 the sergeant was charged with the task of particular importance: to head an intelligence group and seize a bridge over the river Sunzha near a settlement of Petropavlovsk. Then he was to hold it until the arrival of the main group of Russian troops.

For nearly a day the group held the bridge. Then Lieutenant-General Lev Rokhlin, commander of the 20th Army Corps who arrived with the main group came under fire. Ponomarev dragged him to a shelter. Later this fact has generated numerous publications that Ponomarev was killed covering General Rokhlin with his body, which is not true.

On the morning of December 21, 1994 greatly superior forces of Dudayev made a determined attempt to recapture the bridge. The attack was supported by the fire of several mortars. Realizing that they will not be able to hold the bridge in such circumstances, Ponomarev decided to retreat from their position and ordered the group to depart. Along with Sergeant Arabadzhiev Ponomarev was covering the retreat. In a fierce battle, he personally destroyed seven militants, UAZ with the militants and suppressed machine gun emplacement.

Sergeant Arabadzhiev was wounded, and Ponomarev saved him from under the fire, carrying him across the bridge. He was seriously injured, and with the last ounce of his strength he covered Arabadzhiev with his body and gave his life to save the fighter. Soon the reinforcements managed to knock down the militants. The arrival of the column of the main part of the Russian troops in Grozny was guaranteed.

Alas, no one can say exactly how many soldiers and officers were killed in the "Chechen wars." Even more so nobody will say how many civilians and local residents died in these wars.

Historians have an unwritten rule: it takes at least 15-20 years to provide an accurate estimate of the events. However, in the case of the first Chechen war, everything is completely different: the more time passes, the less they are remembered.