Another 'opposition meeting' in Moscow: Falsify the falsified 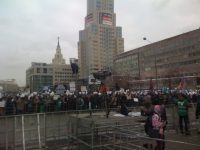 The meeting on Academician Sakharov Avenue in Moscow became the most-talked about event of last week in Russia. The meeting was held under the slogan "For Fair Elections." The meeting on December 24 differed from the meeting on Bolotnaya Square both quantitatively and qualitatively.

This time, the organizers managed to attract more people to the event. According to various estimates, the number of participants varied from from 70 to 120 thousand people. Thus, the meeting of Sakharov Avenue became the largest protest action in Russia in the last twenty years. However, official estimates of the Interior Ministry are more modest - up to 30,000, Interfax reports Monday.

Some said that there were up to 200,000 people on Academician Sakharov Avenue in Moscow, but this number does not look possible.

Here is what opposition activist and blogger Aleksei Navalny wrote on his page: "Of course I admit that I made it up when I said in my speech that there were 200,000 people. From the stage I could see the huge street, completely packed with people. The tail of the street was turning far away - it was clear that there were people there too, though I could not see them."

Ex-Finance Minister Alexei Kudrin's appearance on stage produced a sensation. Kudrin demanded the head of the Central Election Committee Vladimir Churov should resign. He also announced the need to hold re-elections to the Duma, urged the Kremlin to adopt new legislation on political parties, register those parties and advised protesters to elect a group of people who would make a list of requirements to the authorities so that "the confrontation does not lead to another revolution."

Former Prime Minister Mikhail Kasyanov, who shouted to the crowd that changes were needed immediately, not in six years, was greeted with "Two percent!" screams in the crowd.  Another opposition activist, Boris Nemtsov, who said that the people were fed up with the sitting government because "they want to rule forever" was booed too. Yabloko's leader Grigory Yavlinsky was greeted with "Grisha, go home!" shouts in the crowd.

The nationalists, the most moderate of them admitted to the microphone, got even more. The people in the crowd shouted: "Shame!" and "Down".

TV presenter Mikhail Leontiev shared his opinion about the meeting on Academician Sakharov Avenue with Pravda.Ru.

"I think they now gathered the maximum. And it's funny that these guys supposedly gather to protest against the election fraud. Notice how they count the number of people at the meetings - they falsify the numbers twice," he said.

"Even them don't accuse United Russia of fabricating the election results twice. But if you can't count your meeting, where are you getting at then? What 120,000 are they talking about? That area would never take so many! It won't technically take more than 50,000 - a stampede would occur otherwise," he said.

Mikhail Leonitev does not rule out that such actions will continue.

"Will they continue? Of course they will. This campaign fits into the orange revolution scheme. Another thing is that after our "hamsters" are better than their "hamster". They are quieter as fact, more tolerant and they are ready for anything other than compromising self-interest and their own health. Therefore, there's less damage from them."

Leontiev also believes that the people, who gathered on Academician Sakharov Avenue, had little in common. "The demonstrators booed everyone. One part of them booed one speakers, some others booed others, and so on. It's because those people didn't gather for a political action - they gathered to hang out. They have very diverse preferences. There were red flags, white ribbons, green flags, nationalists, etc. These people have no common program and can never have one," Mikhail Leontiev said.