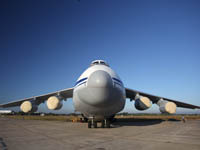 Resuming the production of world's largest serially manufactured cargo planes An-124 Ruslan will cost approximately 20 billion rubles and is not going to happen soon. Several requirements will have to be met first, Russia's Vice Prime Minister Sergei Ivanov told the Izvestia newspaper.

First and foremost, one would have to receive the order for at least 60 such aircraft. Such a large order would compensate the costs. As long as there is no such order for the time being, there is no point in launching the production of the legendary plane. The cost of each aircraft makes up not less than $300 million, which makes the circle of potential customers rather narrow.

According to Ivanov, Volga-Dnepr airline has expressed an intention to acquire up to 20 such aircraft. Russia's Defense Ministry also plans to order nearly 20 modernized An-124 planes. To crown it all, Polyot, a Voronezh-based company, placed an order for 20 new Ruslans a year ago.

However, the orders from airlines will not make the cost of the jumbo aircraft more attractive. As for the world market, there is only one customer for the Antonov 124 - the United States.

In addition, different requirements from civil and defense customers mean that one would have to build two different types of the aircraft. This detail can only make the cost of the plane even higher.

Regulating the ties with Ukraine is another problem. Ukraine considers itself to be the successor of copyright for design documentation for the Ruslan.

An-124 Ruslan is a Soviet, Russian-Ukrainian cargo airplane. The plane was designed by Antonov design bureau for military and civil purposes. The first flight of the jumbo jet took place on December 26, 1982. In 1985, the plane debuted at Paris airshow. Aeroflot started the exploitation of the plane in the beginning of 1986. The plane was presumably used in Siberia: it transported large and heavy cargoes for oil and gas mining companies.

The production of Antonov-124 planes was stopped in Russia in the middle of the 1990s. On December 10, 2009, Russian President Medvedev ordered the government to acquire 20 An-124 airplanes for Russia's Air Force before 2020.