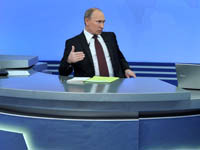 Vladimir Putin took part in his tenth question-and-answer session in Moscow on December 15. This year, Putin appeared in the program as the sitting Prime Minister and as a presidential candidate. The host of the program said that the recent two weeks had been rich with political events in Russia. Putin praised the participants of the meetings for fair and free elections.

The first question to the prime minister was about the elections to the State Duma of December 4 and the mass meeting of protest on Bolotnaya Square.

"The fact that people express their point of view is absolutely normal as long as everyone acts within the framework of the law," he said. He said that he was glad to see young people expressing their active political positions. "I am glad to see that. If it is a result of the "Putin regime" then it's good, I don't see anything extraordinary about it," he said.

The results of the elections obviously reflect the things that have been happening in the country recently, he said. Opposition will always point out unfairness in all elections. It is a question of political culture in which form they do it, the prime minister said. The primary goal is the presidential election, so one should minimize the opportunity of pointing out what kind of elections they will be - fair or not.

Putin put forward a suggestion to install webcams on all poll stations of the country. In this case, he said, the whole country would see what will be happening near each and every urn. This would also put an end to any questions about falsifications.

Putin spoke a lot about the achievements, which have taken place in Russia since 2000. According to him, progress can be seen in practically every sphere. As for the social sphere, 29 percent of the Russian population was living below the poverty line in 2000. Nowadays, the index has dropped to 12 percent. The real income of the population has been growing too, whereas Russia has been improving its position and image on the international arena.

Russia overcame the crisis owing to the economic potential of the country, he said. The economic growth of the Russian Federation makes up 4.2 percent, whereas in Europe it is a bit more than one percent and "zero" in the United States. As for the inflation rate, it was measured on the level of 30 percent in 2000. The current inflation rate is on a record low level, he said - a bit more than 6%.

In general, the economic situation in Russia is "healthy," Putin said. The unemployment level in the country has decreased below the pre-crisis level. As for the debt, Russia's public debt is only 2.5 percent, which is "nearly nothing," Putin said.

Speaking about the goals of the future, the prime minister said that one would need to strengthen the political system in Russia. The system must be self-sufficient, stable and secure from "impostors from the outside."

Answering the question about the future political career of Russia's former Finance Minister Aleksei Kudrin (Kudrin was fired by President Medvedev), Putin said that Kudrin was a close friend of his. "I am proud that I had such a man working in my government," he said. He has been recognized the world's best economist twice, Putin added.

Putin was then asked to comment the statements from US Senator John McCain, who said that the death of Libyan dictator Muammar Gaddafi should make other "dictators" like Putin nervous. Putin said that those threats were aimed against Russia on the whole rather than against him in person. "Some people want to push Russia aside so that they wouldn't be bothered. They don't want Russia to bother their reign on the globe," he said.

Having recollected the terrifying footage and photos of Gaddafi's death, Putin reminded of the circumstances of his murder. According to Putin, the Libyan leader had been killed by US drones and foreign special forces. "Is this democracy?" he wondered.

Putin also recollected several episodes of McCain's biography, who waged war in Vietnam. Apparently, "he got used to such methods," he said.

"It is not a secret that McCain took part in the U.S.-Vietnamese war...he's got enough blood of peaceful civilians on his hands. He probably...can not live without these disgusting scenes of Gaddafi's murder when all the world's channels broadcast how he was killed." [...] "It's well known that Mr McCain was captured in Vietnam and was locked not just in prison but in a hole, where he was imprisoned for several years. Any person would have bats in the belfry after that," Putin said.

The audience burst out laughing.

During the televised conference, Putin was asked to comment news reports, which said that the Kremlin supposedly conducted urgent secret sessions after the protest actions in Russia, which followed the elections to the State Duma.

"I was not summoned to those sessions, I don't know," Putin said smiling.

He continued with saying that he was trying to learn how to play hockey during that time. Hockey has become Putin's favorite hobby during the recent several months. However, Putin compared himself to "a cow on ice that was trying to do something."

A woman asked Putin a question on the phone. The woman wanted to know Putin's opinion about billionaire Mikhail Prokhorov's decision to run for presidency.

"I know that Mr. Prokhorov attempted to establish a political party, which we refer to as a rightist party in our lexicon. However, some problems emerged later. Mr. Prokhorov is a successive man, he doesn't give up. As far as I can get, he decided to use a new platform to promote the ideas which he considers appropriate for our country. He works within the framework of the law and Constitution. I wouldn't say that I wish him luck, because I am going to nominate my candidate too, but I am sure that he will be a strong rival," Putin said.