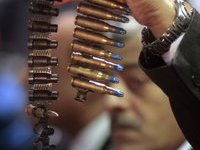 Russia has decided to resume defense cooperation with the country, which remains in a state of a conflict with the United States, even though it is situated very close to US borders. It goes about Cuba. Russia will resume cooperation with this country against the background of the rising tensions in the US-Russian relations. Russia's defense export giant Rosoboronexport is going to conclude a contract with Havana to purchase the processing line for the production of 7.62-mm rifle rounds, Kommersant daily reports.

It particularly goes about the rifle rounds designed in 1943. The processing line is to be installed at Cuba's Comandante Ernesto Che Guevara defense enterprise. Cuba, the newspaper wrote, sent an application to Rosoboronexport last year. Russia will establish the production of the ammunition and provide Cuba with both the license and the technology for the utilization of the ammo.

According to the source, Havana evinced interest in the Russian line after Cuban officials and military men visited the ammunition factory in Venezuela. Russia has been building the factory in the Latin American country since 2006.

The cost of the contract with Cuba has not been exposed.

In the future, Moscow hopes to conclude another contract with Cuba to modernize the entire ammo production, which was established in the country at the end of the 1970s and in the beginning of the 1980s with the participation of Soviet specialists, Kommersant also said.

Cuba was one of the largest buyers of Russia's military hardware from the 1960s till the beginning of the 1990s. Soviet army bases were deployed on the Island of Freedom about 50 years ago, as a result of the agreement between US and Soviet administrations. After the collapse of the USSR, Moscow withdrew the training center for ground troops from Cuba. In 2001, Russia closed its only radar center in the western hemisphere. The decision caused an extremely negative reaction on the part of the Cuban administration. The country lost a considerable share of budget revenues in the form of oil shipments.

From 1961 to 1991, the volume of arms shipments from the USSR to Cuba made up nearly $16 billion. The USSR supplied T-55, T-62 tanks, armored vehicles, anti-aircraft systems, MiG-29, MiG-23 and MiG-21 aircraft, helicopters, submarines, combat vessels and boats, small arms and communication means to Cuba.

All of that hardware has become outdated, of course, and needs to be modernized. The Cuban authorities are aware of that, but financial problems make them start with the modernization of small arms, Konstantin Makienko, deputy director o the Center for Analysis of Strategies and Technologies.

The relations between Cuba and Russia began to improve only several years ago. Cuban Foreign Minister Felipe Perez Roque visited Moscow in November 2008. Two weeks after that visit, Russia's Dmitry Medvedev went to Havana. Raul Castro paid a visit to Moscow in the beginning of 2009.

Resuming defense cooperation with Cuba may exacerbate the US-Russian relations even more, experts believe. In 1961, the United States imposed an economic embargo against Havana. In 1996, the US Congress passed the Helms-Burton Act, which stipulated additional sanctions against the foreign companies that cooperated with Cuba.

In the beginning of the fall of the outgoing year, US President Barack Obama prolonged the economic sanctions against Cuba till September 2012.