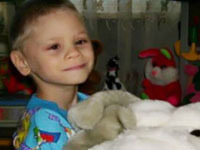 US citizens Michael and Nanette Craver have been charged with the murder of seven-year-old Russian boy Ivan Skorobogatov. The US couple was put on Interpol's wanted list, Interfax reports with reference to Vladimir Markin, an official spokesman for the Investigation Committee of the Russian Federation.

"The central investigation department of the Investigation Committee of the Russian Federation ruled to name Michael and Nanette Craver as defendants in committing the crime stipulated by Part 2, Article 105 of the Russian Penal Code - the murder of underage individual staying in a helpless condition by a group of people," Markin said.

"We sent the adequate documents to the National Central Bureau of Interpol at the Interior Ministry. The defendants have thus been put on international wanted list to determine their whereabouts, conduct their arrest and deliver them to Russian prosecutors," Markin said.

The above-mentioned US citizens committed the murder of the adopted Russian citizen, Ivan (Vanya) Skorobogatov, Vladimir Markin said. "An order about the pre-trial detention of the defendants has also been sent to the court," the official said.

On November 18, a court of York, Pennsylvania, sentenced the Cravers to 16 months in prison for involuntary manslaughter of Ivan Skorobogatov, their Russian-born adopted son. However, since the couple has already spent nearly 19 months in jail, they will not serve any more time.

Russia's Ombudsman for Children's Rights Pavel Astakhov addressed US Secretary of State Hillary Clinton in connection with the mild sentence against the Cravers.

"I believe that Clinton must take Ivan's case under special control and attain justice," Astakhov tweeted.

The official also believes that US prosecutors must appeal the sentence. "I addressed Attorney General Eric Holder. I believe that they must appeal the ill-founded sentence," Astakhov wrote.

Ivan Skorobogatov died away in August 2009 after he had been hospitalized with a serious cranial injury. Doctors connected the boy to the artificial respiration system. Several days later, the parents insisted the life-support system should be deactivated. The parents claimed that Ivan (Nathaniel Craver) was suffering from a serious mental disorder. According to them, he would throw himself on the floor and against the walls injuring himself.

Michael and Nanette Craver claimed that the boy hit his head against the fireplace in their house. The injury, which the boy received, subsequently resulted in his death, the Cravers said.

However, forensic experts found over 80 bruises on the boy's body. Twenty of those bruises were found on his head. The experts also determined that the boy was suffering from malnutrition. The boy was staying in an extreme condition of exhaustion, the medical specialists concluded.

The adoptive parents were free during the time of the expertise. The official results of the investigation were exposed in the middle of February 2010. The Cravers were immediately arrested and faced the danger of death penalty.