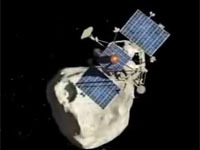 The time period when the lost Phobos-Ground interplanetary space station could be sent to Mars ends on Monday, November 21. There will be no sense in the attempts to establish connection with the spacecraft afterwards, a source at the Russian space industry told RIA Novosti. Even if the connection with Phobos-Ground is established after November 21, the station will not be able to fly to Mars, the source told the news agency.

"The solar batteries of the spacecraft have unfolded. Phobos-Ground is oriented at the Sun, and the ballistic window of the craft to fly to Mars is restricted with the date of November 21st," the source said.

Phobos-Ground interplanetary space station was launched from Baikonur spaceport on November 9. The station was designed to collect the samples of the ground of Mars's natural satellite Phobos. The two stages of the Zenit-2 booster rocket separated normally. The main engine of the station failed to start and set the spacecraft to the trajectory of the flight to Mars.

The malfunction could occur either because of the failure of software or the sensors on board the station, officials said.

All the attempts to establish connection with the space station have not led to any positive result. The head of Roskosmos stated earlier that it was extremely difficult to establish control over the spacecraft.

Roskosmos specialists particularly tried to accelerate the turning mechanisms of the station. In addition, the craft was supposed to start working when it would pass Earth at a distance of several tens of thousands of kilometers.

Vladimir Popovkin stated last week that Phobos-Ground would go out of order completely in the beginning of January if it is impossible to reanimate it before this time. The official also said that there were slim chances for the fragments of the station to reach Earth during fall. There are 7.5 tons of fuel on board the station, Popovkin said. The fuel is kept in aluminium tanks, and they will explode when entering the Earth's atmosphere.

If Phobos Ground falls apart, the fragments of the station may fall down in the beginning of December on the territories of many countries of the world: the USA, China, Africa, the Middle East, several European countries, Australia, Japan, Ukraine and Russia.

The second stage of the Zenit-2SБ booster rocket will enter the atmosphere of the planet on November 22 and fall in the Pacific Ocean, in the area to the south-east off Japan.

A special committee will be established as soon as the station is announced lost. The committee will make conclusions on certain enterprises and possibly people. A source told RIA Novosti news agency that the situation with Phobos-Ground occurred because of the lamentable state of affairs in the field of the Russian space programming.

Roskosmos officials say, though, that the failure with the Phobos-Ground interplanetary station will not cancel the work on other space research programs. The Russian program of planetary research stipulates Luna-Glob and Luna-Resource lunar programs in 2015, Venera-D Venus research after 2016, as well as Mars-Net and Mars-Ground projects. Russia also plans to partake in Europe's Laplace project to explore Jupiter's Europa satellite.

15:08
Russian Parliament ratifies agreements about new territories
18:18
Ukraine invites NATO to join conflict with Russia directly
17:57
Zelensky won't negotiate with Russia while Putin is president
16:20
Putin signs agreements incorporating DPR, LPR, Kherson and Zaporozhye regions into Russia
15:39
Putin delivers landmark speech in the Kremlin
15:15
Lukashenko: If Europe wants it, the war may end in a few days
14:54
Ukraine and the West may force Russia to use tactical nuclear weapons
13:33
Russia to take control of entire Donetsk People's Republic within its 2014 borders
19:02
Mobilised citizens to control and defend new Russian territories
15:52
USA can still crush Russia, but it can also save the world from chaos
World
NATO warns Russia may test nuclear-capable Poseidon underwater drone