Americans get ready for another stage of aggression against Russia 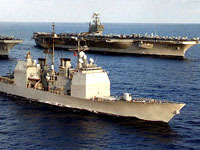 The Russian administration is concerned about NATO's plans to redeploy the vessels armed with guided missiles in northern seas.

Dmitry Rogozin, Moscow's NATO envoy, stated that Russia was very concerned about the USA's intention to temporarily redeploy platforms with guided missiles in the northern seas. It goes about the North, the Baltic and possibly the Barents seas.

"We do not believe that because one needs to intercept ballistic missiles at the moment when they gather speed. The deployment of the fleet with countermissiles in the northern seas or in the Scandinavian region, as well as the deployment of interceptor bases in Poland has nothing to do with the announced problems of missile risks, which the Americans refer to. There is no country that has intercontinental strategic missiles in this region, except Russia, and Russia could be a target for such fleet," the officials said.

"Russia is currently in talks with NATO, but we realize that there is a point of no return," he added.

Dmitry Rogozin also said that, most likely, Russia would not be allowed to participate in the final architecture of the missile defense system in Europe. The discussion on the matter is to take place at the NATO summit in May 2012.

Pravda.Ru asked expert opinion about the crisis in the relations between Russia and NATO from military specialists Pavel Zolotarev and Konstantin Sivkov.

Pavel Zolotarev, deputy director of the Institute for the USA and Canada of the Russian Academy of Sciences:

"Our politicians may only aggravate the relations with the West deliberately. As a matter of fact, the appearance of such vessels will not pose any danger to Russia's strategic security. First and foremost, they will get full-fledged antimissiles to be able to destroy intercontinental ballistic missiles not earlier than in 2020. Nowadays, they can destroy only short and medium range ballistic missiles. Russia liquidated them a long time ago within the scope of previous agreements with the USA.

"It's normal what the Americans are doing. Their actions match their words about the plans to secure themselves from different surprises such as unauthorized launches of foreign IBCs, which can technically happen as a result of technical malfunctions or human errors."

Konstantin Sivkov, the first vice president of the Academy of Geopolitical Problems:

"Such actions of the North Atlantic Alliance pose a huge danger to Russia. They always underestimate this threat when they speak about the missile defense issue. Until recently, there were nearly 85 of GM weapon cruisers and destroyers. In the near future, their number will grow up to 107.

"It may seem that the difference is not that large. The tonnage of the cruisers is 9,500 tons, whereas the tonnage of destroyers is only a thousand tons less. The GM weapon cruisers and destroyers are armed similarly too. Each of them is capable of taking up to 30 or 40 countermissiles on board. If only several of such vessels stay in the indicated territories, they will be able to exert serious influence on the issues of Russia's strategic security.

"The AEGIS is a multifunctional combat system. Intercepting ballistic missiles is not the only thing that the system does. The guided missile weapon system was originally designed to control the tasks for repulsing enemy's missile attacks against vessels and for attacking enemy's vessels. The system is not a brand new one. The first vessels equipped with this system appeared in the United States at the end of the 1980s. Their appearances increased the vulnerability of the Soviet navy. It is much more important or us that these vessels can launch cruise missiles in the radius of 2,500 kilometers. The missile silos of those vessels can house Tomahawk missiles as well.

"One should also bear in mind the fact that the appearance of GM weapon vessels in the Barents Sea will also curb Russia's ambitions in the Arctic region. They pose a serious danger to our surface vessels and submarines. What is worse, the Americans intend to arrange the permanent deployment of such vessels in the Black Sea too. Thus, a big part of Russia, including Moscow, will be endangered.

"The Americans increase the military threat near Russia's borders and get ready for another stage of aggression against Russia," the specialist said.