Does anyone need Transparency International's reports on corruption? 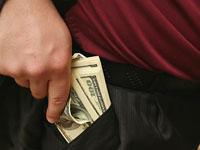 On November 2, Transparency International published another report about corruption. The report contains the Bribe Payer Index of export companies abroad. The index includes 28 largest economies in the world. Russia is also present among them, although it takes the last, the 28th place on the list.

To put it in a nutshell, there is nothing new and surprising for Russia at this point. In 2008, Russia took the last place on the Bribe Payer Index too. The new list is a bit larger, though - it includes several new countries. Russia's indexes have even improved a little in three years because of that.

The reaction from Russia's certain online publications is also indicative. "Russia has become the world leader on corruption," "Russia tops the rating of world's most corrupt countries," and so on and so forth. The new report from Transparency International will undoubtedly become the talk of the day for the Russian opposition.

The index was made on the base of the opinions expressed by 3,000 business executives. They were asked to evaluate the probability of bribes for foreign companies that run businesses in their countries. In other words, the Bribe Payer Index is an index of opinions, just like all other corruption-related reports of Transparency International.

The preface to the report says the research found no country whose companies would be perceived as absolutely corruption-free organizations. It was also pointed out that 22 of 28 countries already took part in the previous report.

As we mentioned above, the report was based on the opinions of business executives from 30 countries. More than a hundred entrepreneurs were questioned in nearly each country, except for China. Such industrial branches as agriculture, light industry and civil aviation were considered the least bribe-prone industries. The situation was the opposite in the activities related to real estate, communal services and construction of public facilities. These are the branches which are not of top priority for Russian companies. The production of oil and gas was not included in this group of "leaders" - oil and gas extraction came fourth.

In general, it would be very interesting to listen to expanded and substantiated opinions expressed by entrepreneurs from Malaysia, Indonesia, Singapore or Taiwan. It would be very interesting to find out why they are so certain that Russian entrepreneurs would give bribes here and there in their countries. Have they seen that in their practice or is it something that they read in newspapers?

Does anyone remember a large-scale corruption scandal in which, lets' say, German or British officials and Russian companies would be involved? Or is all of that a sealed book? This is another form of corruption then.

It would be at least thoughtless to judge the scale of corruption on the base of some reports. The criteria for making various reports and indexes are too far from the objective state of affairs. Such reports can be used to either confirm or disprove this or that point of view. The ratings and reports prepared by Transparency International, Amnesty International or Reporters Without Borders are perceived as an element of propaganda.