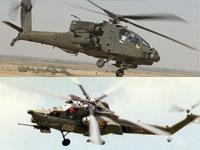 Russia lost another arms tender in India. In the beginning of 2011, Russia failed to win the ten-billion-dollar tender for the delivery of 126 all-purpose fighter jets for Indian Air Force. The Russian MiG-35 lost the tender to Eurofighter and Rafale.

This time, Russia lost the tender for the delivery of 22 attack helicopters. The Mi-28H "Night Hunter" lost to USA's Apache AH-64D Longbow.

This is a very embarrassing defeat for Russia, taking into consideration the fact that India was planning to considerably increase the purchase of attack helicopters.

A source at the Defense Ministry of India said that such actions were not political. The decision was made on the base of the specifications of the aircraft. "The Mi-28H did not meet the requirements of the tender on 20 counts, unlike the Apache helicopter, which showed best results, Indian officials said.

Did the Russian side take that into consideration when it was going to take part in the tender? Does it mean that Russia knew in advance that its product was weak? Can it be possible at all?

A group of Swedish experts, who compared the previous modifications of the Mi-28H and AH64 Apache, said that the US chopper was inferior to the Russian aircraft. The experts came to such a conclusion after the exercise that took place in Sweden in 1995. Three Mi-28A choppers, piloted by Swedish and Russian pilots, produced quite an impression on foreign military men. The helicopters were not detected by the Swedish air defense system and remained unnoticed in the air space of the country for 30 kilometers.

According to experts' estimates, the Russian and the American helicopters are quite comparable, despite the statement from the Indian side. Moreover, foreign experts believe that the Mi-28H was just as good as the AH-64D Apache Longbow. The experts particularly noted the performance of the radar station on board the Russian chopper.

In general, independent experts concluded that the Mi-28H goes ahead its foreign competitors in terms of flight performance, arms specifications, combat survivability and operating convenience. The MI-28H was Russia's response to the appearance of the AH-64D Apache Longbow, the experts also said.

However, India preferred not to purchase the Russian aircraft. Some believe that the nation prefers to diversify its arms procurement against the background of tough competition on the arms market. It is not ruled out that India simply does not want to depend on only one supplier.

This formulation can be true only partially. India has not been satisfied with Russia's execution of its obligations within the scope of defense cooperation. Indian officials particularly said that Russia does not meet the requirements of delivery dates, modernization and repairs.

Optimists say that Russia still control the Indian arms market even though it has lost the tender for attack helicopters. What made the Indian side choose the American helicopter? Pravda.Ru asked expert opinion from Alexander Mordovin and Nikolai Novichkov.

"I would not say that the Mi-28H is inferior to the Amercian competitor. It seems that the reason is different. The Indians have been concerned about the way Russia executes the obligations connected with repairs and servicing of the delivered hardware. We also delay the execution of previously concluded contracts."

"We have a serious problem with avionics. Unlike the US competitor, there was no serial production for the Mi-28H for a very long time. It is an open secret that the flaws, which were not noticed during the testing period, are found and removed during the process of serial production. Russia had only 16 Mi-28H helicopters before 2008. In 2011, the Russian armed forces were supposed to receive 28 Mi-28H choppers, although the serial production of this aircraft could be launched more than ten years ago. Of course, India could choose the Apache just because the helicopter demonstrated its excellent performance during the recent conflicts. Therefore, the advantages of the Russian aircraft are only theoretical."