The destroyer of the new generation, which Russia has been working on for the interests of the national navy, will replace the three classes of oceanic zone vessels: torpedo vessels, large anti-submarine ships and, perhaps, Project 1165 guided-missile cruisers, a source from the Russian defense complex told the Izvestia newspaper. 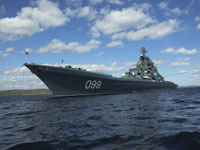 The construction of the new destroyer may begin already in 2012. It is planned to assemble 14-16 vessels outfitted with sets of anti-ships missiles, anti-submarine torpedoes, cruise missiles to hit surface targets and long-range anti-aircraft missiles.

"It will be a universal ship that will be able to replace all three projects. It will leave behind large-anti-submarine ships with the help of state-of-the-art hardware. Its assault and anti-aircraft performance will outstrip present-day destroyers and guided-missile cruisers, except for Pyotr Veliky and several other vessels of this class," officials told the Izvestia.

The new destroyers will give the striking power to the surface fleet. The trump card of the new vessel will include its firing complexes. It will be possible to load the complexes with various missiles and torpedoes. The vessels will also be equipped with fifth-generation anti-aircraft systems.

Depending on the budget and the needs of the navy, the new destroyer may receive either nuclear or gat-turbine plants, officials also said.

During 15-20 years, the Russian Navy will receive 14-16 state-of-the-art destroyers. They will become the basis of the combat power of Russia's surface fleet. As a result, the fleet will be capable of forming small but strong assault groups consisting of a destroyer and three or four smaller vessels.

The Russian Navy has been developing the destroyer of a new generation for several years already. The plans were announced for the first time in the summer of 2009. In March 2010, Interfax news agency reported that Russia had started the development of the new generation destroyer. According to the agency, the vessel was supposed to be built with the use of the Stealth technology. It was also said that the new vessel would have a high level of ecological security, which was not typical of the Russian Navy before.