Russia may lose billions if Chavez disappears from politcs 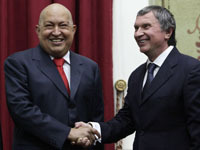 Russia is taking urgent measures in connection with the current situation in Venezuela. Vice Prime Minister Igor Sechin flew to Caracas on Thursday. The quick visit of the high-ranking official was prepared in a hurry. The visit is connected with the illness of Venezuelan President Hugo Chavez - Russia's primary friend in the region. If Chavez steps down because of the disease, or if something worse happens, Russia may suffer billions of dollars of losses in the oil field.

Putin's press secretary Dmitry Peskov confirmed that Sechin was going to fly to Venezuela. The official stated, though, that the visit had been scheduled as usual. Sources in the Russian government said, though, that a trip to Venezuela was not included on Sechin's list just two weeks ago.

Sechin and Chavez had a meeting in the presidential palace in Caracas today, Oct. 7, Reuters reports.

The Venezuelan leader returned home to Venezuela from Cuba on September 23, after a fourth course of chemotherapy. The following day, Venezuela's Foreign Minister Nicolas Maduro stated that the scheduled visit of Iranian President Ahmadinejad to Caracas would not take place because of Chavez's state of health.

Afterwards, many Western news agencies reported that the Venezuelan President was at death's door. However, on September 29, Chavez appeared sporting a tracksuit on the steps of his palace. He played ball and said that he was about to win the battle with the disease.

"I had a tumor. Now, what do you want me to tell you? That I take the tumor and explain to you here what type of tumor it was and the causes?" Chavez said. "I'm not going to gratify you. A malignant tumor. What more do you all want? ... I had it here, they extracted it," The associated Press quoted Chavez as saying.

However, it appears that Moscow is concerned about the state of health of its primary friend in Latin America.

Indeed, Russia has a lot to lose in the country. Venezuela is Russia's second largest buyer of arms after India. The portfolio of Venezuela's orders for Russian military hardware is evaluated at $6-7 billion. If Chavez disappears from the political arena, Russia may not see the money for the hardware that has already been shipped, not to mention new orders.

Russia may lose its oil contracts in Venezuela in case the pro-Western opposition comes to power in the country. Russian experts believe that Moscow must double-check the positions of the ally to decide whether the funding could be continued.

It was reported today that Russia and Venezuela signed the agreement to give Venezuela the loan of $4 billion to maintain the achieved level of defense cooperation with Russia.

Two billion dollars of the amount will be assigned next year, whereas the remaining two billion will be provided in 2013, RIA Novosti said.

Spokespeople for Venezuelan authorities previously said that they were intended to ask for two loans from Russia: $4 billion for arms and $6.5 billion for the development of infrastructure.

It appears that the fears were groundless.