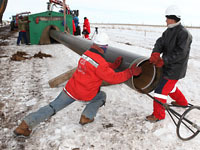 The relations between Russia and Turkey have intensified recently. First and foremost, it goes about Turkey's decision to refuse from the Russian natural gas. Turkey was striving for a price reduction on gas since the beginning of 2010. However, Turkey's BOTAS Corporation has never managed to obtain the desired 20-percent discount from Russia's Gazprom.

However, we have to say that Turkey only refused from a part of Russian gas deliveries - six billion cubic meters a year. Therefore, the country will lose only 15 percent of natural gas shipments from Russia. Secondly, Turkey will have to sign a new contract during the upcoming several months. It is not about the fact that the refusal affected the residents of Turkey's largest city - Istanbul. There is simply no alternative to the Russian gas.

Even if Erdogan had managed to deprive Cyprus and Israel of gas fields in the Eastern Mediterranean, it would not have changed anything for Turkey. It would take the country more than just one year to launch the industrial production of gas in the region. Turkey would at first need to make multi-million-dollar investments and create the necessary infrastructure.

Turkey's Minister for Energy Taner Yildiz stated that Russia remained the most important country for the Turkish import of natural gas. The country imports a much as 30 billion cubic meters of gas from Russia every year. The cooperation with Russia is strategically important for Turkey, and it could not change because of several contracts, the official added.

It seems that Russia will suffer no losses in the scandal. As for Turkey's attempts to receive a 20-percent discount for the Russian gas, one should bear in mind the fact that the country does not mind making profit from reselling the Russian fuel. Since the fuel is more expensive than was originally expected, Turkey loses such an opportunity.  Mr. Taner Yildiz has recently made a strange statement at this point. "We consume nearly 37 billion cubic meters of natural gas a year, but Turkey is capable of importing up to 45 billion cubic meters," the minister said.

World prices on natural gas have grown during the recent couple of years. The price growth has affected the economies of those countries that consume the natural gas. As soon as Turkey partially refused from the Russian gas, the prices on the fuel have increased for consumers immediately. The maximum increase made up 14.3 percent.

Secondly, Turkey has refused from the Russian gas, which the country received on the so-called western route - the gas pipeline along Ukraine, Romania and Bulgaria.

One shall assume that Turkey's behavior is connected with Ukraine's persistent attempts to win a discount for the gas prices. If someone wants to buy something at a discounted price, others want to do the same.

Thirdly, Ankara's behavior is connected with the attempts of the European Union to weaken its dependence on Russian energy carriers.

The Western media paid attention to Russia's reaction in the talks between the EU on one side and Turkey and Azerbaijan on the other side. The talks were about the construction of Nabucco, a competitor to South Stream. Turkey's Botas pipeline company set out a wish to participate in the project.

Turkey has joined the choir of European companies who want Gazprom to cut its prices on natural gas, Reuters said. This has put more pressure on the price model, which lays the foundation of Russia's gas export.

In addition, Gazprom has to deal with similar pressure on the part of Germany's E. ON, and some other European clients. All of them want discounts from the Russian gas giant.

It is not hard to understand the concerns of Turkish and Western business partners. Cheap fuel has always been one of the basic conditions for the prosperity of Western economies. The current situation is different, though. However, the West has always glorified the market freedom and everything else that is related to it. Why does Russia have to refuse from its own profit if gas prices have grown? Would Germany sell Mercedes cars at half-price?

Moreover, the searches in European offices of Gazprom, which took place last week, were supposed to show Russia that the West was not happy with Russia's stubbornness.

A new gas war may again cause damage to Western consumers. According to Reuters, European politicians see Gazprom as the Kremlin's trump card in its foreign policy. The above-mentioned raids were a part of the efforts taken by the European authorities to reduce Europe's dependence on the Russian gas, the agency said.

Many Western experts say that the launch of the Nord Stream project will only strengthen Russia's influence on Europe. The launch of South Stream will only mean that Moscow will connect the Russian gas system to European pipelines bypassing such transit countries as Ukraine and Belarus.

Therefore, the West will lose serious levels of influence, so it is trying to do everything possible not to let it happen. However, Turkey will not become a puppet in the game against Russia. Turkey has its own interests that differ from those of the West.