Russia to build another nuclear power plant in Iran 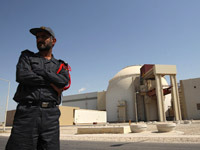 Russia will continue cooperation with Iran in the nuclear field. Sergei Ryabkov, Deputy Foreign Minister of the Russian Federation, said that Russia may participate in the construction of another nuclear power plant in the country.

"The construction of the Bushehr nuclear power plant in Iran showed that Russia was a responsible partner, which was capable of removing the concerns of our partners," the official said.

"The questions of cooperation with Iran in the nuclear field have been regulated with the resolution of the UN Security Council. The resolutions of the UN Security Council do not prohibit the development of peaceful nuclear power. In addition, the essence of the Non-Proliferation Treaty, in which Russia and Iran participate as members, is to guarantee progress in three directions. They include nuclear disarmament, non-proliferation and peaceful usage of nuclear power," the official said.

"We can and should cooperate in this field within the framework of UN Security Council resolutions. I exclude the variants, in which anyone, except for the UN Security Council, could either restrict or affect the adequate work," he added.

"We have proved with the help of the Bushehr nuclear project that we are a fully responsible partner in this field. Russia is capable of finding the mechanisms which weaken and remove the concerns of other members of the international community regarding Russia's cooperation with Iran in the nuclear field," Ryabkov said.

"Bushehr is the example of solution of the nuclear power development problem with 100-percent guarantee of non-proliferation," the official added.

Ryabkov acknowledged that there was no breakthrough in the solution of the Iranian problem. However, the dialogue of the six continues, and Iran shows interest in that.

"There is no final solution to the problem, of course. We have been conducting the dialogue on certain issues, and Iran evinces interest in discussing the Russian plan," Ryabkov said.