Buy a car on World Carfree Day and be happy 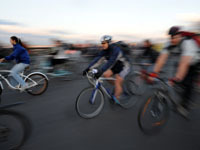 The World Carfree Day is celebrated on September 22. Why do people have to refuse from the zone of comfort which they can enjoy in their own cars?

Andrei Matiev, the founder of the Museum of History of Bicycles, was traveling by bicycles in Moscow for many years. It was really a pleasure at the end of the 1980s and in the beginning of the 1990s. However, riding a bicycle in the Russian capital can be extremely dangerous nowadays.

"It's not even about the quantity of transport in the city. The level of driving skills has reduced considerably, and we have chaos on the roads now," Andrei said.

The man owns a car now, but he says that he has to have it because he has moved to suburbs. It appears, though, that he also does not want to play the game of Russian roulette every time he rides a bicycle in the streets of Moscow.

Aleksei Dozorov, the chairman of the committee for the protection of automobilists' rights, has replaced his car with a scooter, at least for the summer period. He travels much faster now, but a new problem has emerged. Where can he keep the scooter that can be stolen in a blink of an eye?

According to international ratings, Moscow still has one of the longest traffic jams in the world. An average traffic jam in Moscow lasts for 2.5 hours. Those who do not want to waste their time in jams have already refused from personal transport.

Are there any other reasons that can make people say no to their cars? It is clear, of course, that cars pollute the air, and car accidents claim thousands and thousands of lives. However, cell phones can cause damage to human health as well. Many people become addicted to the Internet and can no longer see themselves in the real world. So what? Every medal has two sides. It would be reasonable to urge car makers to make cheaper cars that do not pollute the environment. It would be even more reasonable to urge scientists to invent an environment-friendly replacement to petrol.

It is at least ridiculous to believe that people will become ecologically responsible with so much eye-catching car advertising and attractive credit offers around. The only thing that can work is economic profit and convenience from such a refusal.

Andrei Matiev believes that many Muscovites would be happy to ride bicycles instead of cars, if adequate conditions were created for it. Let's take a look at Germany's Freiburg. First bicycle tracks appeared in the city in 1970. Nowadays, the city has a network of tracks the length of which totals 500 km. The share of people who started to use public transportation has increased from 11 to 18 percent during those years. The number of bicyclists has doubled, whereas the number of personal cars had dropped from 38 to 32 percent.

In Copenhagen, there is no driving in the city center. A very comfortable network for bicyclists has been created in the city, which also showed a very positive influence on the health of the Danes. The people of Denmark enjoy cycling, which considerably reduced the rate of cardiovascular diseases in the country.

"People are mostly pragmatic. They use the things that seem more comfortable for them," Aleksei Dozorov said.

There is also the factor of image and prestige, of course. At the end of the day, the idea of the World Carfree Day appeared in France in 1998. However, the French have not refused from their cars. Moreover, Paris has the worst transport movement system in Europe.