State-of-the-art frigates too expensive for Russia 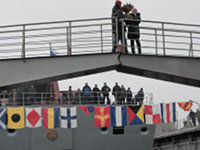 Project 22350 Frigates of that are being built at the "Northern Shipyard" in St. Petersburg turned to be another naval protracted project. Unavailability of a number of key systems of new ships was the main reason for delaying the construction. The main frigate fleet will be commissioned no earlier than in 2012, i.e. six years after the commencement, and this deadline may also move. The deadline of commissioning Project 22350 frigate "Admiral Gorshkov" is constantly postponed, and the price of the project is growing, told "Izvestia" a source at the Ministry of Defense.  During commencement of construction of this ship in 2006, it was assumed that the lead ship will be commissioned in

2009, and its price will be approximately 7 billion rubles. Then the deadline moved up to 2012, and the price had risen to 18 billion. The deadline may still move. Such delays in construction are due to the difficulties in developing new equipment and weapons, the source told "Izvestia".

Military expert and editor of "National Defense" Igor Korotchenko believes that the cause of the protracted project is the difficulty in developing new electronic equipment and air defense systems, as well as ensuring compatibility of all spacecraft systems. "This is a new project, and in addition to the difficulties with its equipment, especially electronic, as well as fine-tuning a new air defense system "Polyment-Redoute," problems arose with linking all spacecraft systems in a single complex. The industry did not have to solve such problems since the early 1990's, and this was the main reason for the delay," said Korotchenko.

In 2005-2006 it was planned that by 2020 the fleet will have 15 new generation frigates, but the delayed construction made the Ministry of Defense look for alternative solutions. The solution was a successful project 11356М. The industry is capable of completing it because it has already fulfilled two Indian orders.

Today the fleet already ordered six of these frigates, which will be commissioned before 2016, and the order of three more units is possible. The number of commissioned frigates of Project 22350 was reduced to six units, and they must enter service by 2018. The construction of new frigates was also delayed by erratic funding, especially in the first stage, according to a source of "Izvestia" in the military-industrial complex. "In fact, the funding for the project in the first three years was almost absent, and then was received intermittently. In addition, in the last two years the situation was complicated by administrative problems associated with the change of the owner of "Northern Shipyard," the source said.

Financial and administrative problems were the main reason for delaying the construction and price growth, says military expert, Captain of 1st Rank Konstantin Sivkov. "The completion term would have been much shorter if the funding was stable, and the price would be lower by at least one-third. Organizational and technical problems have only exacerbated the situation," he said.