Russia will have to purchase planes from abroad - Medvedev 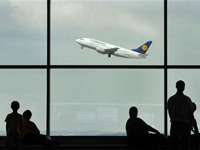 The quantity of airlines in Russia must be cut considerably, whereas the training of pilots should be controlled strictly, Russia's Dmitry Medvedev stated.

On September 8, the president visited the crash site of the Yak-42 plane in Yaroslavl, which claimed the lives of 43 people - Lokomotiv hockey players and the crewmembers. Afterwards, Medvedev conducted a special meeting, in which he gave harsh assessments to the condition of the Russian aviation.

According to Medvedev, the number of airlines in the country must be cut considerably, in the shortest time possible. "We have to finally look into how our air carriers work. We have said before that there are many of them, but I have not seen the decisions about the merger or liquidation," Medvedev said.

It does not go about the most recent air crash, Medvedev said. "There are no reasons yet to make any conclusions. I am talking about the situation in general. We must keep the airlines that are physically and financially capable of servicing the air fleet, attracting qualified personnel and paying good salaries," Medvedev said.

The head of the Ministry for Transport, Igor Levitin, said during the meeting that all Russian airlines working on regular routes will have to possess not less than ten aircraft with over 50 seats from 2012. The number of required aircraft will be raised to 20 from 2013.

Medvedev said that all air crashes that have taken place in Russia in 2011, occurred to the aircraft of small air carriers.

"The statistics shows that small companies control their fleet poorly because of the lack of funds and personnel," the president said.

Medvedev also spoke about the need to renew the air fleet in the country. First priority must be attached to the safety of passengers, rather than to the interests of the domestic aviation industry.

"There is a problem of the air fleet, and the government, as it appears, will have to make a difficult decision. The value of human life must be placed higher than special observations about the support of the home industry," the president said.

"We have to think about our companies, of course. But if they are unable to promote themselves, then we will have to purchase equipment from abroad," the president said. "This will have to be a large program with big money involved," he added.

The questions of civil aviation flights safety have been discussed repeatedly before. There were serious decisions made, considerable funds have been invested, but the situation has not improved, Medvedev admitted.

"We can see that from the series of air accidents that we've had this year," he said.

"The results of the technical and juridical investigation of the reasons of the Yak-42 crash must be used for the decisions that we will make in the future. We must change the state of affairs in the home civil aviation industry. We will have to acquire state-of-the-art transport in spite of the fact that it will cost a lot for the budget," the president said.

Medvedev also urged the Ministry for Transport and other field-specific departments to pay serious attention to the level of training provided for the pilots of civil aviation. "We have problems with that too," he said.

"One has to check the professional qualities of the crews in each and every airline, because I've heard a lot of eye-opening stories about it," Medvedev said.

"Those who are not ready to work will have to go. The human factor, which is much talked about during such accidents, exists everywhere, and our country is not an exception. As a rule, this factor plays the leading role, but we have to do our best to minimize it," Medvedev said.