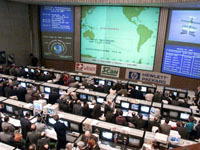 The failure with the launch of the Express-AM4 satellite, which did not enter the operational orbit, will slow down the development of the communication industry in Russia. The loss of the satellite will also hamper the development of digital technologies for several years.

The satellite was launched to develop digital television in Russia and provide communication to those living in remote territories of the country. Some experts believe that there is no use in searching for the satellite in space because it may have fallen down on Earth.

Sergei Pekhterev, the director of Race Telecom, compared the loss of the Express-AM4 satellite to the tragedy on Sayano-Shushenskaya hydroelectric power station. According to him, the failure will put the brakes on the development of the communication industry for two or three years. The lost satellite was the first space probe of "Express" series assembled entirely on the base of foreign electronics. The satellite could operate for 15 years, which is twice as much as compared to its predecessors.

In pictures: Connection with Express AM-4 satellite lost

"This is a serious damage to the communication industry," officials with the press service of the Ministry for Communication admitted. The capacity of Express-AM4 made up 2,722 MHz - a third of the whole active "Space Communication" group of eleven satellites.

The 5.8-ton satellite was designed and built by the Khrunichev Production Center jointly with Astrium, a subsidiary of the European Aeronautic Defense and Space Company (EADS). The Express-AM4 was equipped with 63 transponders operating in C-, Ku-, Ka and L-bands to provide high performance coverage over the Russian Federation and other CIS countries. The package of services, which the satellite would have been able to provide included digital TV, IP telephony, video conference calls, data transfer and Internet access.

Communication Ministry officials said that the satellite was insured in the amount of 7 billion rubles.

Igor Schegolev, Russia's Minister for Communication, previously told reporters that six other satellites of the series launched before 2013. "They will cover 97% of the territory of Russia and a number of neighboring states. Russia will be able to make a commercial communication offers to those countries in a couple of years," he said.

If Express-AM4 has been lost, Russian customers will depend more on foreign satellite providers, Izvestia newspaper wrote.

"During the recent years, we have lost partially or fully three of seven Express-AM satellites. Foreign operators, such as Intelsat and Eutelsat, gradually conquer the Russian market," Mr. Pekhterev, the director of Race Telecom stated.

"Afterwards, when our new satellites finally operate in orbit, it will be very hard to have the customers back. For example, as many as 9 million home satellite antennas in Russia receive signal from Eutelsat W4 satellite. It is impossible to believe that the customers will set their antennas to a different position," he said.

Elena Lashkina, the press secretary of the Ministry for Communication, stated that the terms for the introduction of digital television in the Russian Federation before 2015 would not be changed because of the lost satellite.

No space objects detection system on Earth has been able to find the Express-AM4 satellite yet. The most technologically advanced near-space control NORAD system has not been able to find the space probe either. The system, which belongs to the US-Canadian command of sir and space defense in North America, is capable of detecting the objects larger than ten centimeters.

Officials of the Russian Federal Space Agency Roscosmos withhold comments regarding the fate of the satellite. "A special commission has been established to investigate the reasons of the breakdown," officials only said.