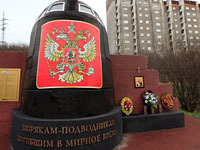 People still discuss the Kursk tragedy on the Internet. Two years after the tragedy, Pravda.Ru was the first Russian online publication to have published excerpts from the analytical note written by Russian conceptual scientists. The note contained unexpected conclusions about the reasons of the Kursk death. Rumor has it that the note attracted attention of top officials of the Russian administration, although they showed no reaction to it, of course.

In the note, the scientists attempted to collect evidence to prove that the Russian submarine sank as a result of the so-called combat collision with a foreign sub. In other words, the version says that the Kursk died in a torpedo attack. There were several photos published on the Internet showing that the edges of the external hull of the Kursk were caved in, but not out, as it would have been in case of an internal torpedo explosion. French film makers even made a documentary on the subject.

This version seems shocking even eleven years after the tragedy. No one has ever rebutted this version officially. Pravda.Ru asked an expert opinion from Sergei Aprelev, a well-known historian and publicist, about the most horrific version of the death of the Kursk.

"According to the authors of that research, a NATO submarine intercepted a message from surface vessels saying that there would be torpedo attacks conducted against underwater targets. The NATO submarine obtained the message prior to the arrival of Russia's Kursk in the area of the military exercises.

According to various sources, there were two US nuclear submarines - the Memphis and the Toledo - staying in the area of the drills. The subs were conducting the traditional surveillance over the Russian vessels. The commanders of NATO submarines announced combat readiness. Unfortunately, the commander of the Kursk could not know that there was a foreign sub staying in the area. According to the plan of the drills, the Kursk commander launched a torpedo. Unfortunately, this is a law of the underwater war: if someone fires a torpedo at you, you are supposed to fire back immediately because there is no other choice.

"In this case, as the authors of the analytical note said, the Russian torpedo was fired in the direction of a foreign submarine. The Americans prefer to launch four torpedoes at once - this is the practice that they have had since WWII. One of those torpedoes was a simulating one, which intercepted the Russian torpedo and took it towards a NATO sub.

"The Kursk commander was informed that there were three torpedoes going in his direction, so he decided to escape the attack. Everything was happening not so fast as he would like to because the Kursk was a very large and not a very maneuverable sub. The first torpedo struck the vessel in the bottom of the second compartment, having left peculiar traces on the hull.

"Most likely, the authors of the research say, it was the torpedo impact that triggered the tragedy. The basic air pipes were damaged in the attack. The Kursk was surfacing, so the submarine had its ballast being scavenged. The third torpedo was going along the deck and didn't cause much damage. The torpedo destroyed itself afterwards.

"The Kursk lost a lot of its air and went down by the head. The fourth torpedo struck the sub after the Kursk hit the bottom of the sea. When the commander of the NATO sub realized what happened, he ordered to release surface buoys, went to the maximum depth and left the area of the drills at a slow speed.

"Some time later, a fishing boat found entered the area of the drills incidentally and liquidated the signal buoys. The commander of the X submarine had done all that automatically.

"This is a brief summary of that review about the Kursk death. Any version has a right for existence as far as the death of the Kursk is concerned. However, no one has ever tried to disprove this version officially, which makes you think that this version could be true.