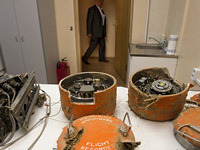 The Polish government commission has published its conclusions on the causes of the crash of the Tu-154 near Smolensk. Despite the attempt to shift some of the blame on Russia, for the most part the position of the Poles coincides with the findings of the commission of the Interstate Aviation Committee (IAC).

The airplane of the Polish President Lech Kaczynski's Tu-154 crashed during landing at an airfield near Smolensk North in the morning of April 10, 2010. During the landing it caught the tops of the trees due to a low visibility caused by a heavy fog. There were 96 people on board - 88 passengers and eight crew members. None have survived.

On January 12 of this year, the Interstate Aviation Committee issued a final report on the results of the technical investigation of the accident, according to which the immediate cause of the crash was the decision of the crew not to go to the alternate airport, as well as systemic factors such as shortcomings in providing flight crew with training.

According to experts of the IAC, the crew had to take the reports of adverse weather conditions into account. According to the Chairman of the IAC Tatyana Anodina, despite the warnings of adverse meteorological conditions at the destination aerodrome, the crew of the Tu-154 has not taken a decision to go to an alternate airfield. At the same time, said Transport Minister Igor Levitin, the Russian managers were unable to prevent the special aircraft from landing as the decision in such situation is taken by the Captain.

In addition, as stated by the chairman of the IAC, the crew was not prepared for the critical flight. According to her, the crew did not have the data on the actual and forecasted weather at the destination airport and up to date aeronautical information.

At some point, the chances to avoid the catastrophe were virtually nil, according to the IAC. The maneuver to avoid a collision with an obstacle was made by the crew at the last minute. The maneuver was very sharp, and the flight recorder recorded that at the time of the collision with a birch tree the aircraft was beyond the operational angles of attack, said the head of the Technical Committee IAC Alexei Morozov. He added that if there had been no clash with the birch, most likely in two or three seconds, the aircraft would have reached the regime of the so-called stall and subsequently collided with the ground.

In addition, it was established that at the time of landing Air Force Commander of Poland Andrzej Blasik was in the cockpit. According to the conclusions of the experts, his presence put pressure on the pilots and influenced their decision to land the plane at Smolensk, at any cost, despite the warnings from the air traffic controllers.

The report of the Interstate Aviation Committee in Poland received various responses. For example, the brother of the deceased president, Jaroslaw Kaczynski said at a session of the Seim that the direct causes of the tragedy were the responsibility of the Russian side. Polish opposition tried to use the tragedy in Smolensk for its own purposes. It looked so cynical that the Prime Minister Donald Tusk had to calm down some MPs and politicians with their anti-Russian rhetoric. He stated that the truth of the catastrophe cannot be a pretext for a political adventure.

At the same time, the experts, including Polish ones, agreed that the investigation was conducted competently and eliminated any questions about the causes of the tragedy near Smolensk.
"The committee, which conducted the investigation, coped with the task professionally," said the head of Yates Consulting, British aviation expert Chris Yeyts. The Committee concluded that, in the first place, the fault lies with the Polish pilot and his assistant. In the transcription of the conversations between the pilot and those who were on the ground during the last attempt at a landing, lies an important detail: the landing at the airport was not possible.

The British expert is convinced that with this information, the pilot had to follow the instructions of the controller and go to a nearby airport, where conditions were better for a touchdown.

"The pilot's error is the main cause of the crash. There were also problems with the preparation for the visit. I would say that it was not the pressure on the military pilots, but the mistakes and failures in their work led to the tragedy," said a Polish military expert, a former Air Force pilot Michal Poland Fizer. "The lack of experience in flight is one thing, but lack of life experience is another. When you're thirty-five, you have no life experience and a lot of ambition. You're trying to do the job because the president expects you to land the plane in a certain place. And you want to prove to him that you are able to do it. "

The accredited representative of Poland at the MAC Edmund Klich shares this opinion. "I am sure that most of the causes of the crash near Smolensk are on us. We cannot even talk about any misconduct on the part of Russia," he said. "A good crew with a good aircraft (there was no information that the Tu- 154 was defective) cannot land this way. Even if there were different orders from the team".

Similar conclusions were reached by the Polish government commission that investigated the causes of the catastrophe whose final report was published on Friday, July 29. Earlier, the head of the commission, the Interior Minister Jerzy Miller has repeatedly stated that, based on the data available to the Commission, the main fault lies with the Polish side. Miller warned that the report will be "harsh" and "painful" for Poland.

Nevertheless, the report states that "the airport did not provide the flight safety, including, due to poor visibility." It is not clear how the airport services could have affected the fog. In addition, as already stated, the decision to land was made by the crew, and not under pressure of the Russian dispatchers.

Another discrepancy with the report of the IAC is that, according to the Polish commission, a warning system TAWS was not configured on the presidential airplane. "TAWS unit was poorly prepared for a flight to Smolensk. Its preparation and activation was the responsibility of the co-pilot", said the experts presenting the report in Warsaw. At the same time, IAC reported earlier that, as established by professionals, TAWS system and onboard computers on the plane of President Kaczynski were in good condition. The tests were conducted in the laboratory of Research Center UASC in the U.S. "It is established that the equipment in flight on April 10 has been properly installed and provided the crew and aircraft systems with necessary information", stated MAC.

However, in general, the report of the Polish Commission coincides with that of the MAC. According to the findings of the Poles, the crew did not want to land, it wanted to test the landing, which proved fatal. "The crew had no opportunity to go to the second round," the document says.

As for the presence of head of the Air Force in the cockpit, the "Polish commission found no evidence that the head of the Air Force immediately put pressure on the crew to land the plane. Nevertheless, the crew was under pressure because of the high-level flight and due to the fact that the first person in the country was on board." However, the following conclusion was also made: "The work of the crew was chaotic, a third party interfered in the work by his appearance in the cockpit, the pilot, the commander was busy with radio communication."

The pilots were not paying attention to the TAWS, which was operational. "The crew ignored the warning of the TAWS. The landing procedure was taken at 60 meters below the permissible level," the report says.

In addition, the experts of the Polish Commission believe that the pilots did not respond to an error in the "test landing", and the commander of the crew made a wrong call.

The conclusions of the Polish Commission shall affect neither the political situation in the country, nor the relationship between Poland and Russia as they are fundamentally not different from the findings of the MAC. "We have investigated the causes of the incident, and not the fault of the parties. The Commission does not investigate who was responsible for the catastrophe," said Jerzy Miller, Poland's Interior Minister, answering a reporter's question whether Russian or Polish side and to what extent was responsible for the tragedy at Smolensk.

However, most likely, the Polish opposition will once again try to use the report for its own purposes, playing, as usual, the anti-Russian card. However, the tragedy took place more than a year ago, and all who wanted have already formulated their view on this subject. The political hysteria, even if happens, will quickly subside.