75 Percent of Russians Trust the President 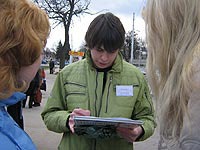 Surveys conducted by the "Public opinion" (FOM) fund and the All-Russian Center for Public Opinion Research (VTsIOM) showed that the overall approval rating of the current president is 75 percent. There is an increase in the ratings of Dmitry Medvedev, Vladimir Putin, and the "United Russia".

The surveys conducted by the fund "Public opinion" show stability and some growth in the rating of President Dmitry Medvedev. To the question "Do you trust or not trust Russian President Dmitry Medvedev," 46 percent of respondents answered "Yes, I trust". "Somewhat trust" was the answer of 28-29 percent of the Russians. That is, the overall rating of the president is up from 73 to 75 percent.

Other parties did not bring any surprises either. The Communist Party, according to both sociological services, has its own stable 10-12 percent, the Liberal Democratic Party - 8-10 percent, "Fair Russia" - 3-5 percent, "Just Cause" and "Apple" - one percent each, "Patriots of Russia" - 0-1 per cent.

Leonid Polyakov, head of the Political Science department of the High School of Economics believes that the rating of Dmitry Medvedev, Vladimir Putin and the "United Russia" is largely an integral indicator of the public trust in the authorities in general. In this regard, in his opinion, it is important that the ratings of the three subjects of the political life are not "jumping", and undergo only minor changes. "These numbers show a stable political system and the preferences of the electorate are also stable," said the analyst. "This suggests that in the coming election campaign the" United Russia" is in a good place to guarantee itself a solid majority in the Duma."

President of the National Strategy Institute Mikhail Remizov also believes that the ratings of Dmitry Medvedev, Vladimir Putin and the "United Russia" "stick together" and depend on each other. "Synchronicity of these changes suggests that the Russian society perceives them as a wholesome power team," says Remizov. "In this sense, the differences in the images of Putin and Medvedev are more interesting to politicians, political scientists, experts, journalists than to the public. For the public, they are a team that is responsible for the government. "

Obviously, the campaign of 2011-2012 election cycle that has already begun will change a few numbers and redistribute them between the participants in the electoral process. For example, political scientists and even the chairman of the supreme council of the party "United Russia" Boris Gryzlov predict that "Just Cause" party will pick up from 5 to 7 percent in the elections to the Duma. Accordingly, the "right", whose rating now hovers around the statistical error, will take these percentages from someone.

It is worth noting that the rating of the "United Russia" is 46 percent prior to the start of the campaign, which is a very good indicator. The "United Russia" has enough time and resources to conduct a competent campaign and secure the majority of votes in the Duma. In addition to those who already know who they will be voting for (46%), there is a large number of undecided voters. These are the voters the "United Russia" will have to work with in the first place.