Russia without alcohol: Utopia or reality? 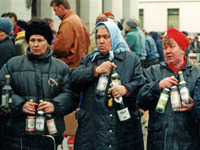 Austrian political scientist, Professor Gerhard Mangott, believes that one of the main threats to the Russians is alcohol. At the same time, Dr. Mangott does not approve of the anti-alcohol policy of the Russian government. Analyzing the proposed measures, he fears that they will result in a massive use of hazardous substitutes, as it happened under Gorbachev.

Gerhard Mangott has been studying the Russian realities and challenges for years. He notes that alcohol lovers are getting younger. At the age of 12-13 years old teenagers gradually take up beer and wine, and move on to hard liquor by the age of 18. As a result, the average adult Russian, according to the statistics of the Ministry of Health, consumes 18-19 liters of alcohol a year.

Independent experts calculated the number of 140 million liters per capita on average. The country has 40 million non-drinkers, including infants and very old people, 70 million of the so-called moderate drinkers, i.e., those who annually consume approximately ten liters of alcohol, and 30 million citizens who strenuously ruin themselves by drinking, consuming forty or more liters of alcohol a year. There is a separate "Vodka stats" - over 30 bottles of vodka a year for each citizen of Russia, including children. The World Health Organization has put Russia in the fourth place in the world in terms of the amount of alcohol consumption per capita. Ahead of Russian are Brazil, Kazakhstan, and Mexico, while South Africa and Ukraine are catching up.

With these figures, it is not surprising that the reason of every firth death in Russia is alcohol-related. Official statistics show that each year alcohol abuse kills 500,000 Russians, and Gerhard Mangott believes that this figure is clearly too low. The analyst points out that this statistics only takes into account the lethal effects of alcohol poisoning, leaving out suicides and murders committed in a state of intoxication, accidents at work and fatal injuries caused by drunkenness, as well as car accidents provoked by drunken drivers.

Professor Mangott notes that the volume of alcohol consumption is linked to the economic and social well-being - the higher the level of welfare, the less interest in alcohol, and vice versa. For example, the Russians drink more in Eastern Siberia and the Far East - the depressed regions of the country. Two percent of the population of the Far East region is already registered in the Maritime Centre of preventive medicine, some of them are minors. The indicator of alcoholics per 100 thousand residents in the region is higher than the national average.

Sociological survey of the Ministry of Health and Social Development, held in June of this year, also confirms the findings of Mr Mangott, connecting unfavorable economic situation and alcohol consumption. More than 25 percent of people in Russia drink alcohol to relieve stress, one third drinks to relax after a hard work week. Slightly fewer respondents indicated that alcohol is a good way to forget about everyday problems for some time.

The government is aware of the grim statistics and therefore has developed a campaign against alcoholism. The two-stage anti-alcohol concept was approved by Prime Minister Vladimir Putin. In the first phase, scheduled for 2012, it is planned to lower the level of alcohol consumption by 15 percent, and by the end of the second stage, in 2020, the consumption is expected to decline more than two-fold, while the market of illegal alcohol will be completely eliminated.

It was decided not to choose the tempting, easy path of banning the sale of alcoholic beverages. Russian President Dmitry Medvedev mentioned the negative experiences of the forced sobriety introduced during perestroika and has supported measures related to positive motivation in giving up alcoholic excesses. In 2011, the Ministry of Health was allocated 300 million rubles for the promotion of healthy lifestyles.

Improving the quality of life in order to discourage alcohol consumption is a new approach for Russia. According to a Public Chamber member Oleg Zykov, Russia never had a policy of reducing the demand for alcohol, only regulating its supply. Now it became obvious to the authorities and the public that they should fight with the causes rather than with the consequences.

Some experts suggest a focused approach in solving the problem of alcoholism. They suggest concentrating on 30 million people who are already ruining their lives by drinking and the high-risk groups - low-income populations, children and adolescents affected by advertising. Lower-risk groups can be addressed later, otherwise this will be another campaign "about everything and nothing in particular." According to a survey conducted by the portal SuperJob.ru, one in four respondents did not believe in any anti-alcohol measures and thought that eradicating alcoholism in Russia is impossible.

Projects "Russia without alcohol" are bottom-up initiatives that have been around for years. One of the most famous projects is a program of Professor Vladimir Zhdanov, the chairman of the Union of People's struggle for sobriety and popularizer of non-medical method of treating addictions. Zhdanov's concept supported by many public figures is focused on the consistent "sobering" of Russia without rigid restrictions that wrecked Gorbachev's campaign. First, state monopoly on the production of any alcohol should be introduced. Second, alcohol must be sold only to customers over 21 years old, only with a state ID, only in specialty stores, only at certain times and only at a very high price, and in restaurants and nightclubs - at even higher price.

So far the government did not react to the project of the Union. Meanwhile, according to the survey conducted by SuperJob.ru, the 18 percent of respondents who believe in the effectiveness of government anti-alcohol campaigns, among the most effective methods name the following three: increasing the legal drinking age, introducing time limits for sales and increase in the price of alcoholic beverages.

Unfortunately, so far the independent experts do not see the real results of the first phase of the anti-alcohol campaign, and call the decisions that have already been made populist and ineffective in the long-term.