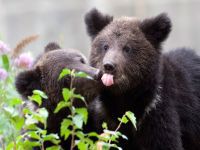 Bear attacks on cattle in Tomsk, Siberia, have increased this year and demonstrate a radical change in the behavior of these mammals, Konstantin Osadchi, the head of the Department of Environmental Protection of the Russian region said.

This year so far in the Tomsk region, there were ten attacks against cattle by bears, when in the entire year 2010, there were only three, Osadchi said in a statement to the news agency "Interfax."

"Probably, changes took place in the mind of the bears: they are curious or they lost their fear of man," indicated Osadchi.

However, he stressed that in the Tomsk region there weren't any bear attacks recorded against people.

"Previously cases never happened where bears joined in groups to kill cattle. It is a typical behavior of wolves, not bears," detailed the official.

He added that the last episode occurred early in the month in the Molchanovsk district, in the central region of Tomsk, where a bear walked into a barn and attacked, injuring a cow.

These attacks, according Osadchi are usually made by young bears, about three years old.

Conflicts over food between adults and young animals may be one of the causes of anomalous behavior of the animals, said the official, who estimates that the population of bears in the region of Tomsk is about 10,000 individuals.

Osadchi says the number of these animals could increase further with the forest fires of great magnitude in the region.

According to an ecologist, one of the ways to control the population of bears is the liberalization of hunting. "Currently, permission for hunting costs just over $100 and an additional amount more per animal. The hunting of bears is very expensive, and therefore unpopular with hunters," explained Osadchi.