Russian vodka in exchange for passport 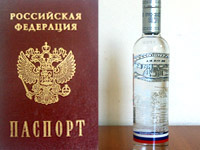 On April 15 of this year, the Ministry for Industry and Commerce of Russia issued a decree to toughen the control over the purchase and sale of strong alcohol beverages. A customer buying beverages stronger than 15 degrees will have to provide a document of identification. The measure was approved by the Russian government to restrict and possibly minimize the sale of strong alcohol beverages to underage Russian citizens.

A seller will have to ask for customer's ID when selling a bottle of vodka. If a customer refuses to provide an ID, the seller will have a right not to sell the beverage. Foreign citizens will be able to buy strong drinks in Russia if they present passports of their states.

The list of documents which will be accepted for buying strong drinks at Russian stores has been formed on the base of photo+birth date principle. The list contains 13 documents in total.

Pavel Shapkin, an expert with the center for the development of national policies related to alcohol beverages, believes that the above-mentioned decree from the ministry is underdeveloped. The list of documents mentions such IDs as permission for temporal residence in the Russian Federation, certificate of refugee or certificate of temporal shelter in the Russian Federation. To put it in a nutshell, if you want some vodka, you will have to prove your status of a political refugee.

Experts also doubt that the new law will stop entrepreneurs from selling vodka and cognac to underage individuals. Many refer to recently introduced regulations to ban the sales of strong beverages in stores after 10:00 p.m. However, it is still possible to buy vodka at night. A salesperson will bring a bottle of vodka or cognac from a store room. The stores that break "no vodka at night" rules will break "vodka in exchange for passport" rules just as easily.

Beer, including strong beer, is not regulated by the new rules.

Anton Nezvetsky, a lawyer, is certain that restricting the sales of strong alcohol beverages in Russia is absolutely necessary.

"This is a necessary measure. Selling alcohol to underage individuals is a crime. It's a crime against Russia, because they sell vodka to young people, who do not attach much responsibility to their actions yet. One can only welcome the fact that the Russian government has been struggling against illegal sales of alcohol.

"Some may wonder whether the new rules will be beneficial in controlling the sales of poor quality alcohol. Surrogate alcohol and selling alcohol to young people - these are two different issues. If a person wants to drink vodka after 10 o'clock at night they will be looking for a place where they can buy the drink. As long as there's demand, there will be supplies, including illegal supplies," the lawyer said.