Russia and EU gather for summit amid intestinal infection outbreak 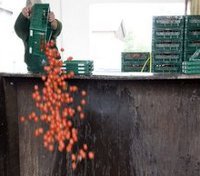 On Thursday a two-day summit on Russia-EU relations opened in Nizhny Novgorod. It is assumed that one of the main topics will be the possibility of abandoning the visa regime. The Russian side brings this topic to the table at each such event, but the Europeans do not hurry with solid steps. It is limited to the EU's readiness to make some concessions, but even these concessions often remain just words.

In addition, the story of enteric infection in Germany has exacerbated the situation. Fearing contagion, Russia temporarily banned the imports of vegetables from the European Union. This made Brussels bureaucrats indignant, and they called the measure "disproportionate" and promised to talk about cucumbers in Nizhny Novgorod. The event will certainly touch upon other standing issues for such forums - power, the situation in the Middle East, trade, and democracy.

What to expect from this EU-Russia meeting? Should Russia expect progress in the visa issue? Alexander Rahr, a political scientist and expert at the German Council on Foreign Relations talked about these and other issues in an interview with Pravda.ru.

"Should we expect a breakthrough from the summit?"

"Hardly. This event will soon be of a bureaucratic, legal nature. This is primarily due to the representation of the EU delegation. It is represented by Brussels bureaucrats who do not have the right to vote on key issues. They tend to engage in formalism, they have to take into account the opinions of 27 member states of the EU. And it's not easy. Some countries want to talk tough with Russia, while others are more constructive."

"The EU will certainly accuse its partners because they would not be able to complete negotiations on joining the World Trade Organization. Russia will forward these claims to the United States and Georgia, that, strictly speaking, do not allow it in. So in a sense it will be similar to a conversation between a deaf person and a mute one."

"Is there any point in holding such events if they rarely bring resolutions?"

"If we do not hold them, then there will be even no appearance of a dialogue, the appearance that the ways for a dialogue are sought. For the sake of decency, such activities are needed. But it seems that Russia should better engage in a dialogue with individual countries - Germany, France, and Great Britain. There would be more progress. Maybe the EU-Russia summit should be held every year or every two years instead of twice a year like it happens now. Then the results would be obvious".

"One of the main topics of EU-Russia relations is the abolition of visas. Can we expect any progress in this respect?"

"If there was progress, we could be talking about a breakthrough. However, so far this is not the case. Here, Russia must seek approval from the Ministry of Internal Affairs of the individual European countries. However, for example, Germany's Interior Ministry does not give such consent. Officials of the agency in a conversation with me complained that Russia has done too little to make its passports more technically sophisticated, so that they cannot be falsified.

It is difficult to say whether it sounds plausible, or if it is a banal excuse. It seems to me that this issue can be resolved. The political will on both sides is required - mostly from the EU and its member countries."

"How much can the ban on the import of vegetables from the EU countries due to the outbreak of intestinal infections in Germany affect the atmosphere of the meeting?"

"The Europeans certainly inquire why Russia has chosen such severe measures as a ban on the import of these products. However, this cannot be the main topic. After all, this is the question not for Russia but for Germany, whose ill-conceived statement has damaged the Spanish peasants. The Germans are strongly condemned for the "cucumber scandal" by its EU partners.

"These forums often discuss the situation in the third countries. What could be the focus this time?"

"The EU delegation is likely to raise the issue with the situation in Belarus. Today, the country lying between Russia and the EU is on the verge of an economic collapse. For Europeans, it is important that at least some democracy and market economy is established there, and it is important to persuade Russia to put joint pressure on Alexander Lukashenko. For example, in order to make the Belarusian authorities allow foreign investors. Other topics likely to be discussed are the situation in Libya and the Middle East and North Africa as a whole."

"Is there a negative impact on the relations between Russia and the EU from the fact that this year the European Union is chaired by two former socialist countries - Hungary and Poland?"

"Currently, the role of the Brussels bureaucracy is large enough to make the presiding country not too important. The Hungarian Prime Minister Viktor Orban in Nizhny Novgorod will get lost next to the European Commission President Jose Manuel Barroso, President of the EU Hermanomvan Rompuy and the High Commissioner for Foreign and Security Policy Catherine Ashton. The same thing happens with presidents and prime ministers of other countries.

In addition, during the Hungarian presidency no new ideas were heard, as previously from Belgium and Spain. The only time you can talk about the great role of the EU Presidency is that of France in the second half of 2008. Then, in many respects the efforts of President Nicolas Sarkozy, speaking on behalf of the entire Europe, managed to stop the war in South Ossetia. However, the forthcoming Polish presidency might be interesting."

"Can Poland put the EU eastern policy and the relations with Russia, Ukraine, and Belarus at the heart of its presidency?"

"Exactly. The Poles have a special interest in the development of the EU's "Eastern Partnership", which invited the western and southern Russia's CIS neighbors, but not Russia. The events in Ukraine and Belarus present special interest for Poland. They seek to make Brussels understand that these two countries in Europe largely belong to Europe, rather than the "Russian world". Russia should closely monitor all steps of the Poles in this area.

Incidentally, in two weeks Warsaw will host a summit on the EU "Eastern Partnership". There the EU will manifest itself much more clearly than in Nizhny Novgorod in terms of its attitude towards Russia."