No place for racist plague in Moscow 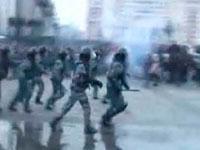 Aggravation of interethnic relations that resulted in riots on Manezhnaya Square in Moscow in December of 2010, prompted the city authorities to respond with preventive measures. After the ban of some far-right movements heating up the already volatile subject, they authorities now work at some large-scale social projects aimed at promoting tolerance.

Moscow seems to have seriously decided to fight for the normalization of the situation. As it turns out, the city authorities mean to implement a comprehensive program of activities in support of positive interethnic relations by the end of 2011. According to some reports, Sergei Sobyanin has already signed the corresponding resolution. The project involves a series of measures - from social advertising and the creation of special sites and positive films to holding various cultural events.

For example, among the abovementioned activities the Moscow authorities intend this year to develop and implement a project of social advertisement entitled "Cure yourself of racism." "The implementation of this project includes the development of scripts for outdoor social advertising, external design and implementation of media projects for posting on the Internet", RIA Novosti news agency reported. According to a representative of the mayor's office, there are also plans to create a site devoted to ethnic issues.

Importantly, in July-December, the city authorities intend to undertake a comprehensive monitoring of the condition of inter-ethnic relations in the administrative districts (raids on places of compact residence of migrants will be organized for this purpose). It is also planned to organize the work to promote inter-ethnic cooperation and prevention of xenophobia in social networks. The city authorities also intend to provide assistance to religious organizations in carrying out various cultural activities.

The media provided the figure of 110.6 million rubles allocated from the budget for "preventive" purpose. According to the newspaper Vedomosti, the department of inter-regional cooperation and national policy will be allocated 22 million rubles and will implement the social advertisement project.

Jaroslav Ternovskii believes that the allocated funds will not be wasted. "The Moscow City Government properly responds to the evolving situation, because the improvement of the situation in the area of ​​strengthening of the inter-ethnic relations is a move in the right direction. They will have not only a healthy cultural and public benefits but also economic ones," the member of the Public Chamber said in an interview with Pravda.ru. "Moscow should become attractive to investors. This program will affect the investment climate."

"It is hard to judge if the money is allocated to the fight against xenophobia is much or little," said in an interview with Pravda.ru a member of the Public Committee Ivan Mohnachuk. "To ensure that this money is not wasted, a supervisory board must be created for each program or project that would consist of people interested in the feasibility and appropriateness of the spending. It would make things better."

"As for the various forms (of the development of tolerance), public service ads should be actively engaged in this area," Mokhnachuk said. "In addition, they must make arrangements with the media for active coverage of the events aimed at solving the problems of xenophobia and the formation of a normal social climate."

Of course, it would be hard to question the acuteness and necessity of the measures taken by the capital's government. The ratio of Muscovites to the migrants has long been known. According to opinion polls, in the ranking of the major problems named by the residents of the metropolis, in addition to the traditional issue of high prices and rising utility bills, there is the item "dominance of immigrants from southern republics" has long been in the first place.

Another question is that tolerance, or rather, lack thereof, has less to do with the issues of education and cultural relations (this is of course also important), but more with unresolved immigration issues, or even with seemingly unrelated issues such as corruption in law enforcement and economically justified decline in the birth rate among Russians.