Yuri Luzhkov: The beekeeper may return 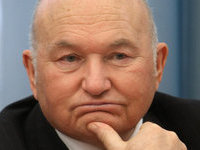 Former mayor of Moscow Yuri Luzhkov may return to big politics. The Vedomosti newspaper wrote that Mr. Luzhkov may have such a chance if he is offered the mandate of State Duma deputy Vladimir Gruzdev, if the latter becomes a governor, for example. Experts believe that Luzhkov may return as a politician only if the situation in the country changes for the worse.

President Medvedev had a meeting with Vladimir Gruzdev, the first deputy chairman of the Committee for Legislation of the State Duma, last Friday. If Mr. Gruzdev takes the position of the governor of the Tula region, his mandate will have to be handed over to the leader of a regional group, or a member of the same group, who has not become a deputy. Yuri Luzhkov is one of those people - he chaired the party list of United Russia's Moscow members in 2007.

The publication refers to the words from a source from the presidential administration. The source particularly said that the former mayor may join an opposition force, the Communist Party, for example, during elections. Officials representing the Communist Party did not exclude Luzhkov's coming to the Duma.

"He is a member of United Russia in his spirit, and we've had many fights with him before. We even walked out of the Duma to protest against the organization of the voting process in Moscow," Oleg Kulikov, a spokesman for the Communist Party said. "Luzhkov is a stranger to both our program and our law-making work, our ideology. He can in no way become a member of either the faction or the party. He would at first have to repent his sins for that. Will he be able to do it? I doubt so," the official said.

State Duma deputy Sergei Markov told the Vedomosti that "there is a wish to build Luzhkov in the power system on the threshold of elections." The deputy did not specify whose wish it could be exactly.

Experts say, though, that Luzhkov's comeback to big politics before the elections is not likely to happen. If it does, it will be conducted in the marginal status only.

"The only situation in his position - he may only want to preserve his good name. This is his only objective which he may have to come back to politics. But I do think that it's a fantasy anyway. No one is going to give Luzhkov a tribune prior to a large political season. I believe that Luzhkov will remain a resigned politician - this is his function," Dmitry Gusev, the chairman of the board of directors of Bakster Group said.

Mikhail Remizov, the president of the National Strategy Institute, believes that Luzhkov may return only if the situation in the country worsens. "He may try and play some game in this case to become useful to someone. He may also return as a political pensioner in a marginal status, which he is not interested in," the expert told Pravda.Ru.