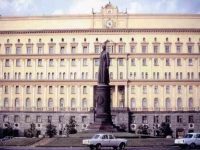 A monument to Yuri Gagarin may appear on Moscow's Lybyanka Square, in front of the iconic building of the former KGB. The new monument is said to be erected on the spot which was previously (before August of 1991) taken by a monument to Felix Dzerzhinsky, the first director of the Bolshevik secret police.

The idea to install a monument to Gagarin on Lubyanka is one of the initiatives that has been submitted to the Moscow government. Officials representing Memorial Association said that Gagarin himself would not feel very comfortable if his monument would be placed opposite the building of the Federal Security Bureau. "We believe that Sergei Korolyov, who had many things connected with that building would not be happy about it either," Arseny Roginsky, the head of Memorial Association said.

Mikhail Fedotov, the head of the committee for human rights and civil society, supported the idea to install the monument.

"There was a fountain on the spot of the square where Dzerzhinsky's monument was later erected. Nowadays, there is nothing there, and it looks plain esthetically. The appearance of the monument to Gagarin, first man in space, a Russian, would be reasonable," the official said.

Sculptor Zurab Tseriteli put forward an idea to retrieve the monument to Dzerzhinsky on Lubyanka.

The discussion about the monument on Lubyanka Square means that the issue of monuments, especially of the Soviet period, is still relevant.

"It would be easiest not to change anything at all. The things that happened - they happened. It's history. In other countries, they usually keep their old monuments. They are historical assets and they do not bother anyone. It's better not to touch anything now. Otherwise, it would generate a discussion that would separate people into two different camps," Nikolai Drozdov, a TV host, told Pravda.Ru

"Here, as far as I can see, it's a political decision. I believe that politics should not relocate or demolish monuments. Look at Paris: nobody touches any monuments there. I would definitely agree to replace all monuments if it could change the situation in the country for the better. But I think that it's a mistake to change monuments, to bring something back and think that we are doing something positive for the country. The monuments have been erected, it's history. What's the point of fighting against your own history?" cosmonaut Georgy Grechko said.

The monument to Felix Dzerzhinsky was put up on Lubyanka Square in 1958. The monument remained there for 33 years, and was dismantled on August 22, 1991. Nowadays, the monument can be found in the Park of Arts, behind the Central House of Artist in Moscow.