Without patriotism, the state turns into duster - Medvedev 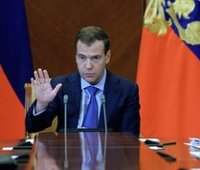 An original red banner above the Reichstag can now be seen in the Central Museum of Armed Forces in Moscow. Dmitry Medvedev, the President of Russia, visited the museum several days ago, before Victory Day, to open "The Banner of Victory" exposition.

"This banner is a relic of our people. It would be fair if everyone could see the authentic Banner of Victory," Medvedev said.

The Banner of Victory was handed over to the museum in 1945. The banner was exhibited before 1965. Afterwards, it was replaced with a replica, whereas the original was put away from the public eye to ensure the security of the banner.

War veterans were invited to participate in the solemn ceremony. Among the veterans, there were comrades-in-arms of Mikhail Yegorov and Meliton Kantaria - the two soldiers, who raised the Soviet flag above the Reichstag on May 2, 1945.

Medvedev said during the ceremony that the Russian authorities should pay more attention to patriotic upbringing of new generations.

"We have different forces in the country, and we cannot reform them directively. We can not suppress those who think otherwise. We must persuade them, but the state coercion can be used in certain cases," Medvedev said.

The president exemplified his point of view with American armed forces that are based on contractual service. It does not mean, though, that there are non-patriots serving in the Armed Forces of the United States, Medvedev added.

"One has to admit that the USA and some other countries of the world have succeeded a lot in the field of patriotic upbringing. Without patriotism, the state falls apart. It can turn into a duster, and others will simply be using this duster to wipe their feet with it," Medvedev said.

Speaking about assessments of history and state leaders of the past, Medvedev said that there should not be any political campaigns about it. According to the president, it is more important to give people an opportunity to access objective information.