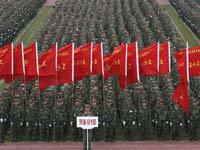 The Chinese vessels unloaded the excavated soil on other parts of the river, which may also change the watercourse of the border river, Russian official said.

The above-mentioned activities were conducted without Russia's agreement, which violated the inter-governmental border agreement between the two countries.

Such reports arrive from the Far East of Russia on a regular basis, almost every year. Every time when it happens, Russia asks for explanations, but China leaves Russian inquiries ignored.

Moscow handed over the islands on the Amur River near the city of Khabarovsk under China's control in an attempt to solve the territorial dispute with the Celestial Empire once and for all. China has not set any territorial claims to Russia yet, but it just so happens that the country is trying to do it in an artful way.

Is China planning anything? Does it mean that Beijing is not going to forget a million of square kilometers of the land, which the country lost as a result of unfair agreements with tsarist Russia?

Eugene Khakimullin, an expert for China, believes that there is nothing terrible happening.

"China has been doing that for decades. No one can claim that the country has moved the border for kilometers from its original location. China is not trying to conquer Russia's Far East like that. However, China has not refused from such actions after the demarcation of the border in 2005. As a result of the demarcation, Russia lost Tarabarov's island, the western part of the Large Ussuri island and some other smaller islands.

"The economic expansion of China is much more dangerous. The country is now planning to build a large and city and a port on Amur, in close vicinity to the Russian border. Fuyuan - the city and the port - will appear only 20 kilometers far from Khabarovsk. Fuyuan is going to bear the status of the free economic zone. If so, the population of the city may grow considerably in just several years. The center of economic activities will move to the Chinese side. The residents of Khabarovsk are looking forward to the opening of the airport. Once the airport is open, the people will be able to travel to China directly and avoid speculative prices.

"Chinese businessmen will obviously have interests on the Russian side. The economies of the two border cities will penetrate into each other deeply. It would definitely be a very positive phenomenon. However, Khabarovsk is the capital of Russia's huge Far Eastern federal region. The territory of this region is larger than that of the European Union. Russia may eventually lose its sovereignty over the Far East," the specialist said.

Alexander Khramchikhin, first deputy director of the Institute of Political and Military Analysis, also thinks that one should not take the situation too dramatically.

"They can't move the border for 600 kilometers, like that. But, many a little makes a mickle. If they do it every year, the territorial losses may eventually become serious. One should also bear in mind the fact that China may win Russia's strategic islands as a result of its works on the riverbed. It is possible to do it if they change the river flow artificially, excavating the soil and then unloading it where needed.

"Beijing has not given up on the attempts to change the riverbed of border rivers. It means that China follows its ancient tradition observing treaties as long as they are profitable for the country. Thus, China openly demonstrates that the territorial problem with Russia has not been solved.

"As experience shows, in such cases China usually chooses the tactics of silence. Instead of negotiations, the country simply continues to do what it needs to do. I am not sure that Russia will be willing to ruin its relations with China over small islands, even though they are strategically important. It is ridiculous to discuss this problem at the UN too. China, as a member of the Security Council, will simply veto the discussion.

"For the time being, we can only watch China stealing territories from Russia - the territories, which China considers its own. China is desperate for new territories, and the country will be trying to get them from all of its neighbors," the expert said.