What Medvedev really said about Putin 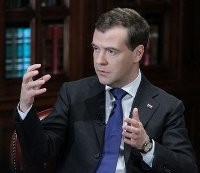 Russia's Dmitry Medvedev arrived in China. Today, on April 13, he is having a meeting with Hu Jintao. On April 14, Medvedev is going to participate in the BRICS summit. The organization, formerly known as BRIC (Brazil, Russia, India, China), now has a new member - The South African Republic.

Prior to his departure to China, Medvedev gave an interview to China's Central Television (CCTV). Chinese journalists asked the president the traditional question about his relations with Prime Minister Vladimir Putin and wondered about the plans for the next election.

Chinese journalist: "Mr. President, because I am a journalist I cannot help asking you the question which interests the whole world. What is the format of your cooperation with Prime Minister Putin?"

Dmitry Medvedev: "I can't say that this is the most original question that I've heard. But this is normal. You are supposed to ask such questions and I am supposed to answer them.

"As for my relations with Vladimir Putin. I've said that many times before and I would like to say it again. We have friendly and very warm relations which have been formed during the recent 20 years. This is a long period, including in my own life. I've known Putin for almost a half of my life, this is a very long time, and we met for the first time in Petersburg many years ago.

"We communicate; we communicate as friends, but we are having different positions today and different roles. I am the president of the country, the head of state, who guarantees the execution of the country's Constitution. The president forms the government and administers many processes in the country. The government is dealing with its own businesses - the economy, the social sphere - they do it every day, and this is very extensive work. This has obviously left traces in my relations with my colleague. It's just as the same as when I worked in the government and Vladimir Putin was the president - it was a mirrored situation, and this is normal.

As for the future. No one knows what the future can bring, of course, but I can tell you that I, as the sitting head of state, as the president, think about the future, of course. I am supposed to do this. I do not exclude the fact that I will be running for the second term as President. The decision will be made, in the near term, because, as you correctly said, there is less than a year left. But this decision must be ripe in the first place. Secondly, it must rely on the existent social situation, on the current balance of political preferences, and most importantly, on the attitude of the people. One is supposed to weigh all chances before making such decisions. One should not act mechanically - it is important to be aware of the situation fully. I hope that this understanding will be formed in the relatively near term, and I will speak about it."

Curiously enough, the majority of Russian liberal media outlets only reported about the president's words regarding his possible nomination. They did not even quote Medvedev, but reformulated his remarks instead. Such publications omitted Medvedev's complimentary remarks about his friendly relations with Putin and the work of the government. Most likely, they do not want to ruin the rumors and myths about the imminent collapse of the Medvedev-Putin tandem.

As a matter of fact, the president of Russia repeated the words which he has said many times before. The tandem will make a consolidated decision about the presidential election in 2012. The decision will be based on the preferences of electors and on the political situation.