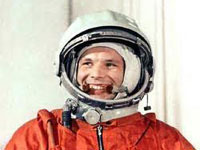 Fifty years ago today, Soviet cosmonaut Yuri Gagarin became the first human being to enter space, providing a remarkable benchmark in a victorious and heroic Soviet space program. It is important to remember that the space race was also to develop into the pinnacle of peaceful and scientific cooperation.

The space race belonged to another era, a Cold War fight for supremacy in which the number of Soviet "firsts" vastly outweighed those of the main competitor, the USA's NASA. Yet it is important to remember that the space race was also to develop into the pinnacle of peaceful and scientific collaboration, that today American astronauts use Russian spacecraft to reach the International Space Station in a spirit of friendship and cooperation.

Yuri Gagarin's historic space flight on April 12, 1961 was one of many firsts for the Soviet space program, which we could consider began with the first satellite (Sputnik, 1957) and the first launch of an ICBM (R7 Semyorka, 1957). The first animal in space followed: Laika (1957). Two years later came the first rocket into lunar orbit, Luna 1 in 1959 and the first arrival on the Moon, Luna 2.

Therefore when Yuri Gagarin (Vostok 1, 1961) became the first human being to enter space this was yet another pinnacle in a heroic and ground-breaking, pioneering scientific program in which the USSR blazed a trail for its brethren in the international community.

Gherman Titov in the same year was the first man to spend a day in space and sleep in space. In 1963, Valentina Tereshkova became the first woman in space. There followed the first space walk (Aleksei Leonov, 1965), the first object on the surface of Venus, 1965 (Venera 3). 1966, Luna 9 was the first object to make contact with the Moon and make a transfer. First lunar orbit, 1966.

First docking in space, unmanned (Cosmos 186/188) in 1967. The U.S. curiously only managed to imitate this achievement in 2006. 1969, the Soviet space program registered the first manned docking and exchange of crews. The first samples of the Moon were sent by Luna 16 in 1970. The first robot on the moon came in 1970 (Lunokhod 1). The following year, first data received from the surface of another planet, Venus.

The list goes on and on and on. The first space station (Salyut 1, 1971), followed by Mir and the tremendous number of space records broken by this fore-runner of the ISS. 1971, the first probe to reach the surface of Mars (Mars 2). 1975, first pictures of the surface of Venus. 1984, first woman to walk in space, Sveltana Savitskaya. 1986, first crew to visit two (Russian) space stations, Salyut and Mir.

Because Mankind will always be far more important than machines, the heroic victory of Yuri Gagarin fifty years ago must come as the most important benchmark in the history of space travel and shall remain in the annals of space history as the beginning of Mankind's relationship with the Cosmos. More importantly, it provides a shining example of what can and must become a unifying feat which opens the gateway for peaceful cooperation among Russia and her partners in the international community. If alone the Soviet Union could do so much, then surely together we can go further and do more.