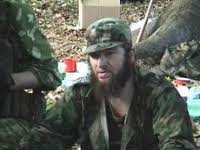 Chechen warlord Doku Umarov is known as the Russian Bin Laden. Like ghosts, the two terrorists manifest their existence in cyberspace. It seems that Umarov has risen from the dead again. This time, he made his appearance in a phone call to Radio Liberty.

The conversation took place in the Chechen language. The man, whose voice sounded like Umarov's, introduced himself and said:

""There was an operation (last week) in which several mujahedin died," the man said. "My death was announced, too. They won't receive any respite from me. I'm preparing my answer to them. They should expect news from me soon."

According to Lifenews, the law-enforcement agencies of Moscow are expecting terrorist acts in the center of Moscow, in the area of three railway stations - Yaroslavsky, Kazansky and Leningradsky - which are situated close to each other. The acts can be supposedly conducted by Viktor Dvorakovsky. This "Russian Wahhabi" left the settlement of Goryachevodsk, near the city of Pyatigorsk, on March 6.

Dvorakovsky is connected with another Slavic man of Islamic beliefs - Vitaly Razdobudko. The latter is also a follower of Doku Umarov. Moreover, special services believe that it was Razdobudko, who was supervising the two women who were going to explode themselves on Moscow's Red Square on New Year's night. One of those women was killed by her own bomb hours before the planned terrorist attack. The other woman, Zeinap Suyunova, was arrested. She testified against Razdobudko. Noteworthy, Razdobudko's common-law wife, also a suicide bomber, killed herself in the village of Gubden.

Anonymous sources describe Dvorakovsky, the supposed terrorist, as a suicide-prone and mentally unbalanced individual. This sounds like a good description for a suicide terrorist.

In the meantime, Doku Umarov's death has not been confirmed officially. He was said to have been killed in an air raid conducted by Russia in the republic of Ingushetia. According to the National Anti-Terrorist Committee, there were 17 terrorists killed in the operation. Two other gunmen were arrested. As many as 30 guerrillas were arrested on the site of the operation. The procedure to identify the severely disfigured and fragmented bodies still continues. There is still no answer to the question of whether Doku Umarov is among the killed terrorists. The identification process may take months, a source at special services told RIA Novosti. Soon afterwards, the media distributed Umarov's telephone interview. However, the interview does not prove his "resurrection" at all.

It is not the first time, though, when Umarov was pronounced dead by Russian special services. The DNA analysis confirmed the death of Umarov's right hand man - Supyan Abdullaev and his personal doctor, Khamzat Byutukaev. The first one of them was known as "the father." Gunmen characterize him as a very experienced commander and intelligence man. He trained hundreds of young Mujaheddins. As for Byutukaev, he was very close to Umarov as well. The terrorist warlord supposedly has diabetes: a bag of insulin and syringes was found next to the doctor's body.

However, the man, who called Radio Liberty, rebutted the rumors about Umarov's illness.

"I don't complain of my health, and I don't know those illnesses, which the Russians are talking about," he said.

Another "resurrection" of the notorious terrorist and his promise to avenge will now be holding Moscow in awe.