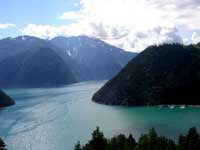 Last week, the State Duma put an end to the dispute between Russia and Norway that had been ongoing for a few decades. The members of the Russian Parliament  ratified the Russian-Norwegian agreement on maritime delimitation in the Barents Sea, signed in September of last year.

The process of signing the agreement was long and complicated. For many years the two countries could not agree on the division of a large sea water area of ​​175 thousand square kilometers. The area has large reserves of hydrocarbons and fish; therefore it is not surprising that nobody wanted to concede. Negotiations have commenced in 1970, but for a long time they have yielded no results. The issue was inherited by Russia from the Soviet Union.

The lack of the agreement on the delimitation has tangibly harmed both sides. For example, since 1980 no exploration was conducted in the disputed area. In many ways, the lack of progress in the negotiations was due to the fact that Norway, a member of NATO, for a long time had people in office who were not inclined to compromise with the seemingly weakened Russia. Things began to change in 2005 when Jens Stoltenberg became the country's Prime Minister.

In 2007, Norway and Russia have managed to agree on the 120-km southern section of the disputed waters located between the Russian peninsula Rybachiy and Norwegian Varanger peninsula. The northern section and a portion of the high seas still remained disputed.

In late April of last year Dmitry Medvedev visited Oslo. Following the visit, the Russian President and the Norwegian Prime Minister gave instructions to prepare a draft treaty on the delimitation of the remaining disputed land. Jens Stoltenberg, commenting on it, noted that the disputed territory would be divided into two equal parts.

On September 15, 2010, the Russian-Norwegian dispute was resolved. On that day, foreign ministers of both countries in the presence of Medvedev and Stoltenberg signed a long-awaited agreement. Under the agreement, Russia has acquired 860,000 square kilometers of the disputed area, Norway - 510 000. In addition, the signing of the agreement allowed removing the moratorium on exploration that had lasted for years.

The resolution of the dispute with the Norwegians opens great perspectives in the development of the Arctic resources for Russia. The northerners have unique equipment for deep drilling in the polar latitudes. Without it, it would be very difficult for Russia to develop the Shtokman and many other fields. The Norwegians are winning in this situation as well, as their companies are admitted to Russia's wealth.

It is difficult to overestimate the international significance of the signed document. Russia, Norway, Denmark, the United States and Canada are arguing hard about the Arctic shelf. All except Russia have joined NATO and theoretically are able to unite against Russia as one front. Americans, Canadians and Danes have repeatedly said that they would not give Russia an inch of the Arctic. Fortunately, the Norwegians were able to negotiate, and the potential anti-Russian block could be somewhat weakened.

Some people in Russia consider the treaty an unacceptable concession to the Scandinavians. The opponents of the document also refer to the unsettled Russian-Norwegian dispute over Svalbard that has been ongoing since 1920. Although the archipelago belongs to Norway, Russia has the exclusive right to conduct economic activities there.

However, contrary to international norms, the Norwegians have established a 200-mile fisheries conservation zone, and Russian fishermen keep getting caught by the Norwegian fishery protection agency. In 2005, a Russian fishing trawler "Elektron" with two Norwegian inspectors on board tried to escape from the agency. However, this is a topic for another set of negotiations. In the meantime, the parties have resolved the issue of the disputed section of the area.

At the same time the current ratification of the document by the State Duma (the Norwegian Storrting did it back in February) is unlikely to automatically lead to the end of the debate about whether Russia had another way out. Did Russia win by signing the document, or did it lose? Nikita Zagladin, head of the Center for Comparative Socio-Economic and Socio-Political research of the Institute of World Economy and International Relations shared his thoughts in an interview with Pravda.ru:

"This agreement is beneficial for Russia. First, let's imagine that we suddenly received everything we wanted, giving nothing to the Norwegians. Russia has poorly developed technology even for the production of hydrocarbons in shallow waters, not to mention anything deeper. The Norwegians, however, have successfully begun drilling even at great depths.

If the Norwegians do not help us develop the Arctic wealth, who will? There are very few countries in the world that could compare with Norway in this respect. Moreover, I cannot even say when we will obtain such technologies. That said, we simply have no choice but to make friends with the Norwegians.

Second, in negotiations Norway shows itself as a flexible partner in contrast to all other contenders for the division of the riches of the Arctic (especially Canada). Norway has proven it by signing a contract with Russia regarding the division of the contested areas. The terms of the agreement were fair enough. Oslo did not claim they was pressure from Moscow, preferring to divide everything nearly equally.

Third, such an agreement is also a starting point for further improvement of the relations between Russia and Norway in an environment where other Arctic countries are trying to divide oil and gas, pushing each other away. Uniting together, supporting each other, we could better defend our positions."