The long and winding road to Mr. Vice President 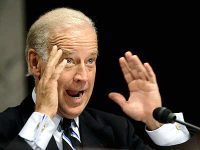 On Tuesday, Vice-President Joe Biden arrived in Russia. The main focus of his meetings with Russian leaders will be trade and investment. He will also hold meetings with representatives of the opposition that have become a tradition. Boris Nemtsov will have an honor to meet Biden for the first time.

Biden, along with his wife and granddaughter, flew into the Russian capital the day earlier. The meetings with the Russian leadership are scheduled for Wednesday and Thursday. On March 10, Biden is planning to talk with Russian opposition politicians and civil society representatives.

Such meetings are conducted by senior U.S. visitors on a regular basis. We are not talking exclusively about politicians of the level of the president, vice-president or secretary of state.

For example, think about the founding conference of the "Other Russia" coalition which took place in Moscow in July of 2006, just before the G8 summit that was held in St. Petersburg that year. Naturally, the conference was not attended by the American president or Secretary of State. Yet, the then deputy head of the Department of State Daniel Fried did honor the conference with his presence along with the ambassador of Britain Anthony Brenton, Ambassador of Canada Christopher Westdal, and president of National Endowment for Democracy Carl Gershman. This fund, according to Novaya Gazeta, was one of the sponsors of the conference.

There was also last year's meeting between the director of the department of Russia in the National Security Council Secretary Michael McFaul with human rights defenders and representatives of non-system opposition. Proceedings of these meetings were later published on WikiLeaks.

Typically, the participants of such meetings are very specific people. In particular, the defenders working with head of the Moscow Helsinki Group Lyudmila Alekseeva or politicians at the level of Vladimir Ryzhkov who is a regular at the U.S. embassy.

According to Russian press reports, this year Boris Nemtsov is among the invitees. Not that he had never visited the building on Novinsky Boulevard. Yet, in order to be among those invited to a meeting with the U.S. Vice-President, he had to conduct a long preparatory work. In particular, he had to become concerned with the issues of restoring the American leadership in the democratic world, become worthy of the attention of the senators John McCain and Joseph Lieberman, as well as the State Department and U.S. National Security Council.

This kind of meetings at the U.S. Embassy became a tradition of sorts. However, it is decidedly unclear what the utility of such meetings is.

As for the Americans, they will find out on their own what they need and what they do not need. What is beneficial for the Russian human rights community about the same people talking about the same issues year after year? What is the benefit for the people who consider themselves politicians, and claim that they express the attitude of a certain part of society, to regularly report to the embassy of another country?

There is no doubt that there are certain benefits for those people who are invited to the embassy. Their opinion counts, their evaluations are heard, at least seemingly. Yet, they will not be able to win the elections with this baggage.